#SylviaNatterer is a phenomenal artist, with a distinctive style. At #Petitcollin, this style comes through in a fresh new way - more colourful than in the recent past. Sylvia's so talented, but she's also modest and clearly still loving working as much as she always has done. In this report there are photos from the Nuremberg Toy Fair, January 2016. Since then we've met again at the Halle Munsterland, in Munster, Germany, during the weekend 23rd-24th April - photos and news from that show will follow soon, but it's best to bring the photos and news to you in sequence, so as not to miss anything out!
Here's Sylvia Natterer with her 2016 doll collection for Petitcollin. It includes a brand new line for 2016 called Starlette. 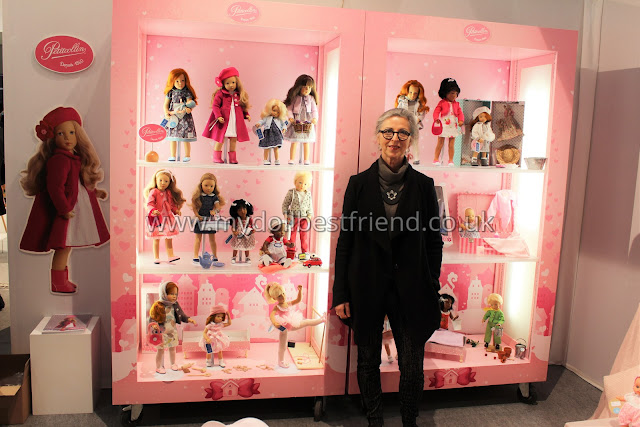 Sylvia has had a long career of over 30 years of making dolls and teaching others how to make them,

but her own work is at its very best now. I say that as a doll fan absolutely buzzing about the 2016 collection, having just seen it again!  Sylvia really wanted to bring the Finouche line of dolls back to the doll world earlier than last year (Finouche had not been made since Zwergnase days in 2006) but there wasn't the support for this taller doll from Kathe Kruse where Sylvia worked previously, and where the smaller Minouche dolls were favoured. Sylvia created the Finouche of 2015 some time ago, so when she moved to Petitcollin in late 2014 it was this doll she desperately wanted to make. However, having seen the beautiful Starlette sculpt the directors at Petitcollin wanted to introduce the Starlette line of dolls with Minouche first. However, Sylvia photographed Finouche and put aside Starlette, and so got her wish!
From left: Finouche Brigitte, Finouche Lucie, (Minouche Joelle) and Finouche Melanie. 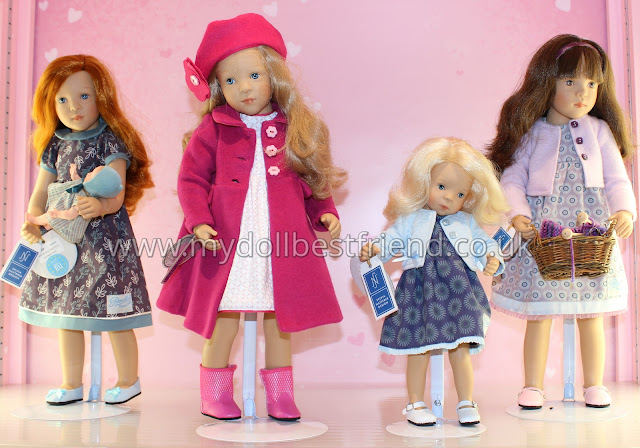 More photos of the gorgeous Finouche dolls:
There's a new boy doll in town called, Jonas. He joins the Finouche collection and was inspired by a boy Jonas who Sylvia knows well,; a graphic designer, who helped her tremendously with the photography and layout for the first Petitcollin catalogue.
This year the French brand finally gets to launch its long awaited Starlettes, alongside Finouche and of course the very popular and charming Minouche dolls.
The collection of Starlettes is 44cm tall  and was inspired by a doll that Sylvia made for Gotz of similar height.
The Starlette collection consists of 4 dolls:
Luella, a brown vinyl doll with black hair and brown eyes;
Tatiana, white vinyl doll with red hair and blue eyes;
Coppelia, a white vinyl doll blue eyed ballerina doll with pale blonde hair;
...and, Milena, a dark blonde white vinyl doll with blue eyes.
The Starlettes are 44cm tall and have a new body which is slightly shorter than the Finouche, who are 48cm tall.
I always love the fabrics the dolls wear because they're feminine and pretty, but what makes the clothing so interesting is that this prettiness comes not always through floral prints as you might expect, but through geometric prints often inspired by nature - but represented in a cleaner, crisper and more abstract way.
This year the Minouche packaging completely transforms into doll beds, with little wooden legs, making the packaging even cuter, as well as more useful! 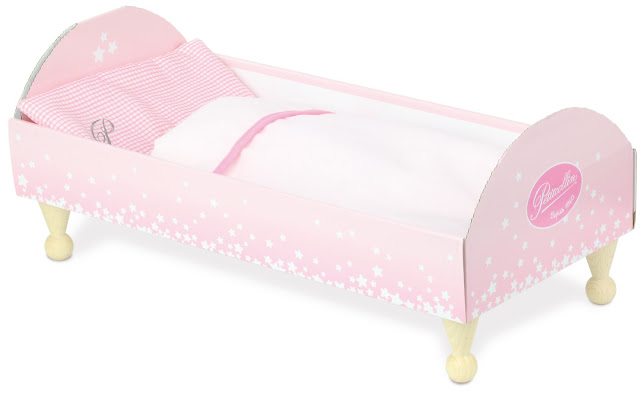 The lid lifts off and the doll and 4 wooden legs are inside, ready for immediate doll bed construction! 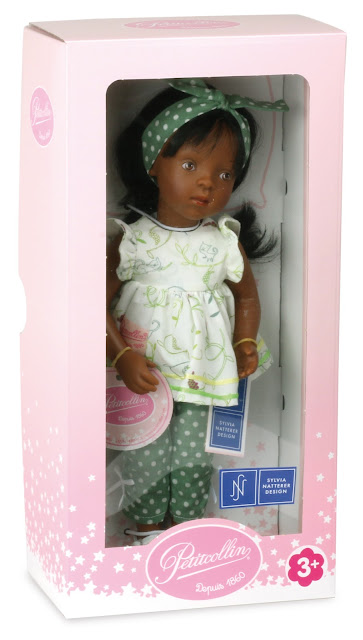 Petitcollin have been creative with Olga's box too, it's quite a wardrobe and even comes complete with an extra outfit and accessory set, which we love! 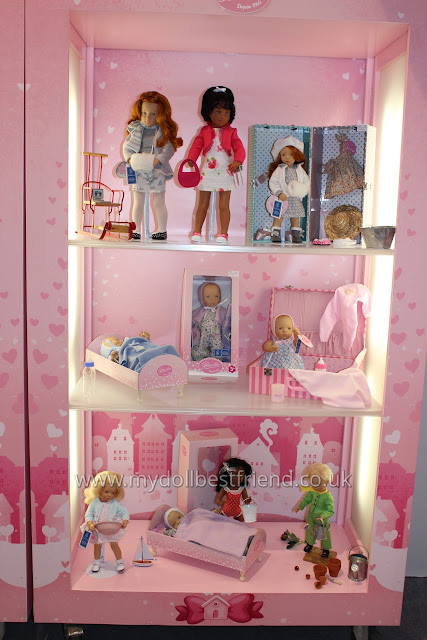 Here's Olga in her cute extra set of clothes and accessories.
The case looks like this when closed. It has got a useful carry handle, as well as good storage inside. 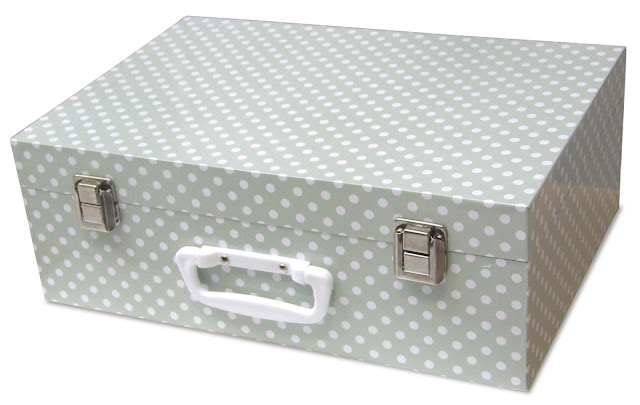 Another of the Minouche dolls new for 2016 is Alba. Sylvia commented how much she loves Alba - she really thinks she's cute!
This is Joelle from the 2015 Minouche collection which we're stocking again in 2016 (while stocks last) because she's also adorable.
In 2016 we have the beautiful Minouche doll Mona who comes with an adorable baby doll.
It is quite easy to spot a them with this year's Sylvia Natterer dolls. Many of them carry their own dolls, and not just any dolls, but Petitcollin dolls. For Sylvia, this is a symbol of the artistic co-operation between her beautiful brand, and the esteemed French doll house of Petitcollin established in 1860. Very much together they work to bring us these dolls.
Starlette Milena has a pale blue quilted crib for her doll
Peek inside....it's a girl! She has such gorgeous toes!
For the Finouche collection, it's Brigitte who has the baby doll. Her doll's clothing co-ordinates beautifully with her own.
Here are some more photos of the dolls together, so you can see how they all look together - no one want a single doll; it has to have company.
From left: Finouche Smilla 2015 and Starlette Milena 2016
What about the Little Prince? 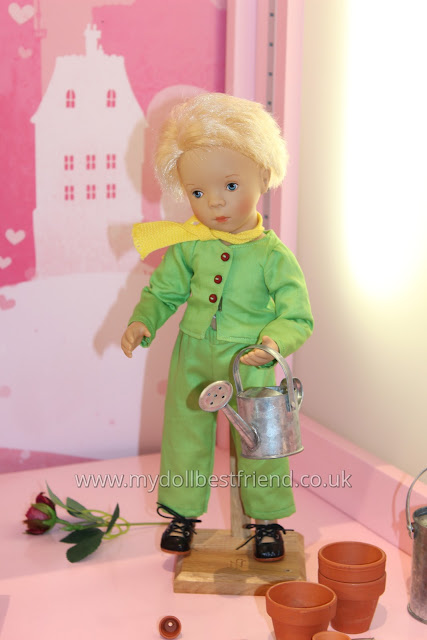 The Little Prince first popped up in Nuremberg, and as he's not in the Petitcollin 2016 catalogue I am still wondering what he was doing there. He looks very sweet - do you notice that he does not have the same face as Minouche Luc, but instead he has the girls' face?
Dolls exhibited at the show were hand painted by Sylvia - as they were prototypes. There will be slight variations from the dolls you see in these photos to the production dolls, due between April and July 2016. We're so excited because the first dolls and accessories have just arrived at My Doll Best Friend!
Sylvia's dolls sell out quickly, leaving us impatiently waiting for the next ones....
I'd like to give huge thanks to Sylvia Natterer for spending so much time telling me everything you've read here, and I promise, there's even more to come!
Categories: Brands, Petitcollin Dolls - Sylvia Natterer & #News & Latest Releases
Tags: sylvia natterer, petitcollin & minouche