The store will not work correctly in the case when cookies are disabled.
Welcome to this shop of excitement and happiness, where imaginations flourish!
Menu
Account
Settings
Language
UK Store View
USD

The Queen of Halloween

Jessica threw a Halloween party for her friends last night. She dressed in a green taffeta dress and wore a silver pumpkin pendant that she rather liked. 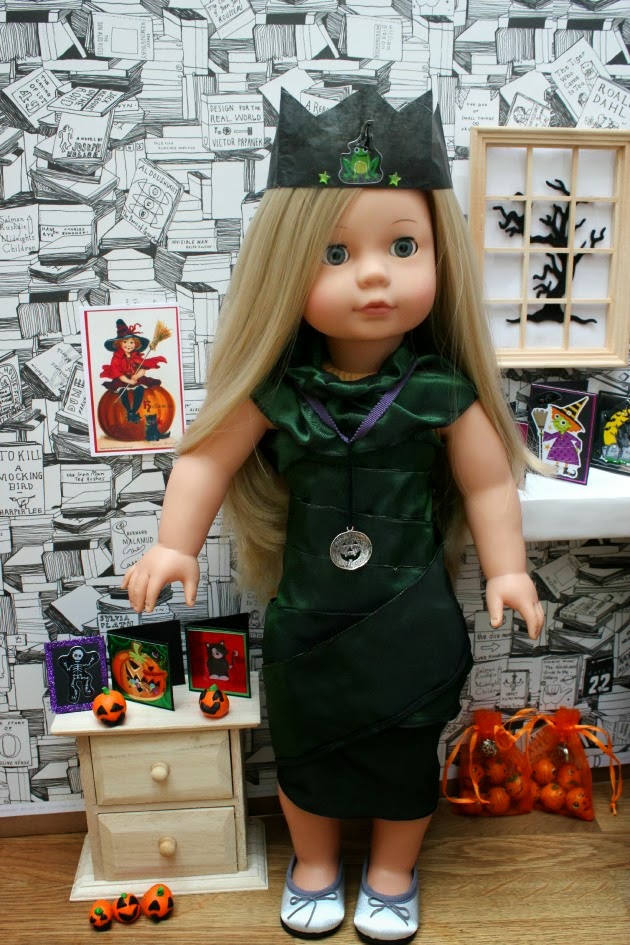 She invited Giselle who came dressed in a pink and black cobweb top with black tutu, set off by a beautiful new pink rubies and jet necklace and bracelet set, made for her by a dear friend. 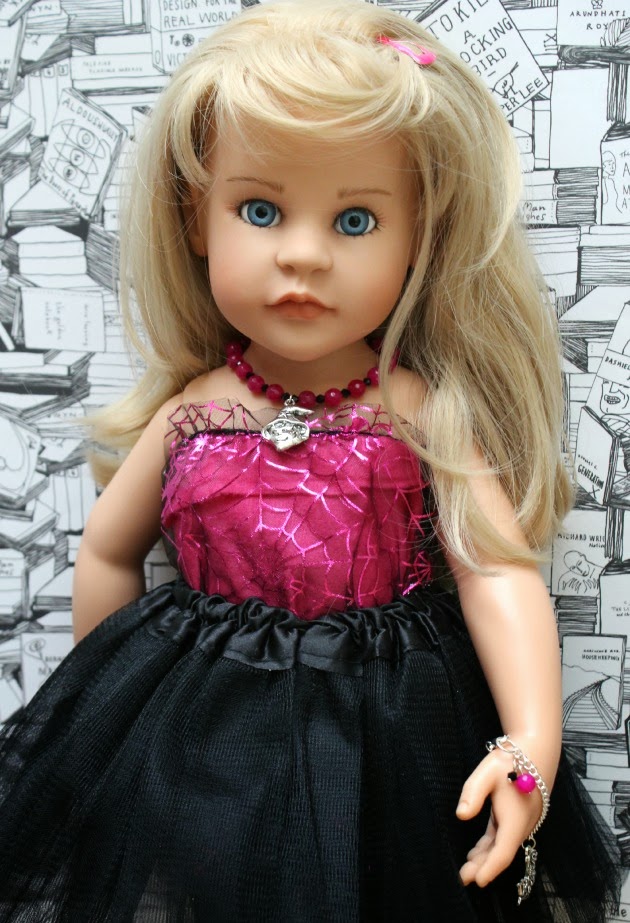 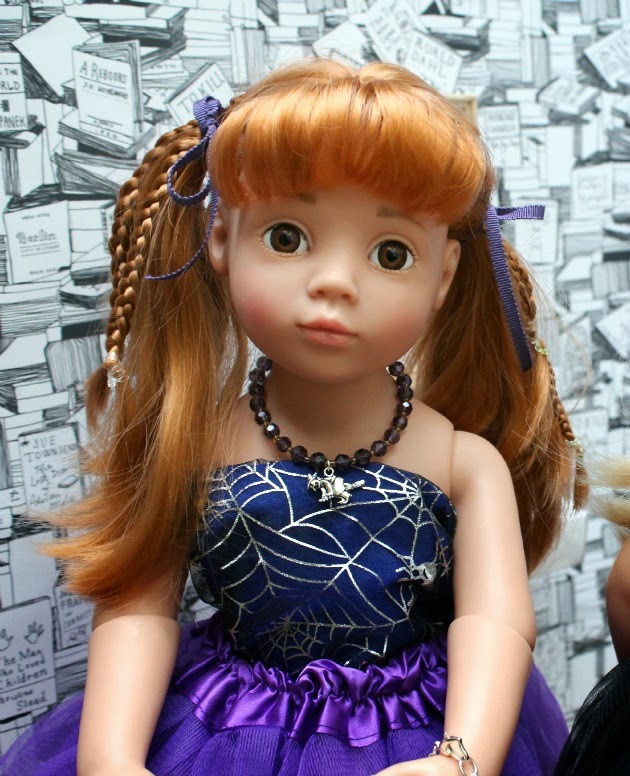 Of course Marlies, her best friend was invited to the party too. They had become very good friends indeed since Marlies moved to her school when her parents emigrated from Germany for work earlier in the year. Jessica and Marlies were both calm, sweet characters and the other more lively girls like Sophie and Giselle loved to be around them and vice versa, they made a happy group of friends. 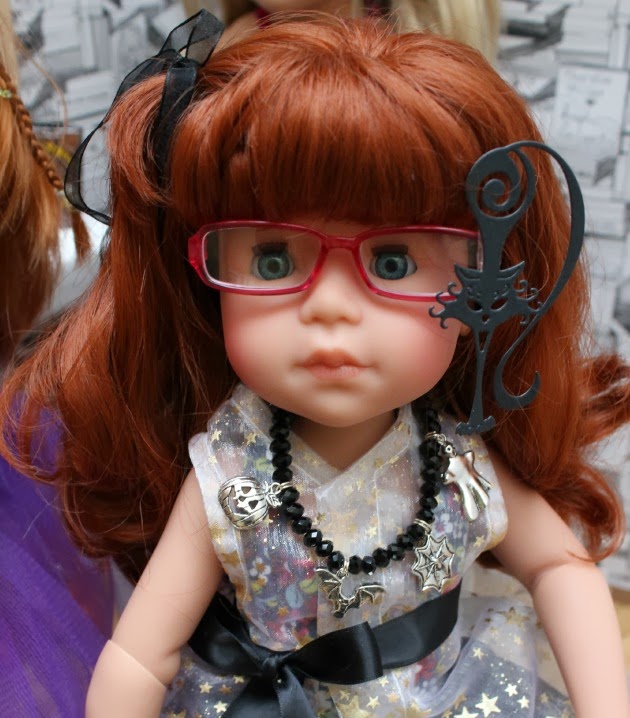 Marlies was wearing Halloween accessorised glasses. She just loved this black cat and thought it made a great embellishment to her pink glasses. She borrowed her mum's black Swarovski crystal charm necklace for the party. Her mum had some fabulous beautiful and sentimental handmade jewellery that she occasionally let her borrow and Marlies was always very grateful.

Sophie was very excited to play all the party games Jessica had organised for the evening. 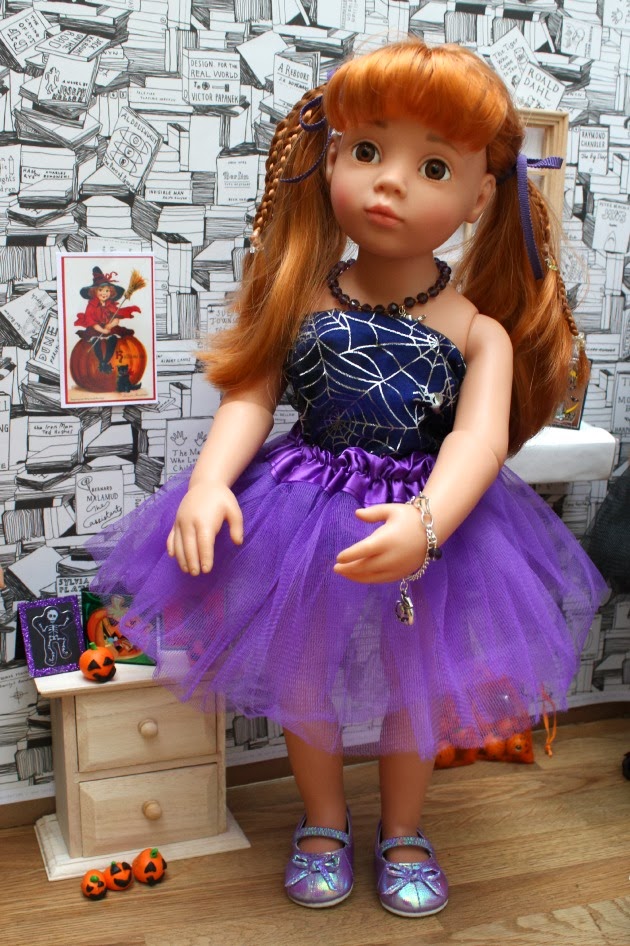 Jessica organised them into teams to play Halloween charades. Sophie was first up to act out "Bewitched!". It needed a bit of concentration but was a lot of fun and they laughed and shouted out constantly. They played this game most of the evening with frequent breaks for party food and drink. 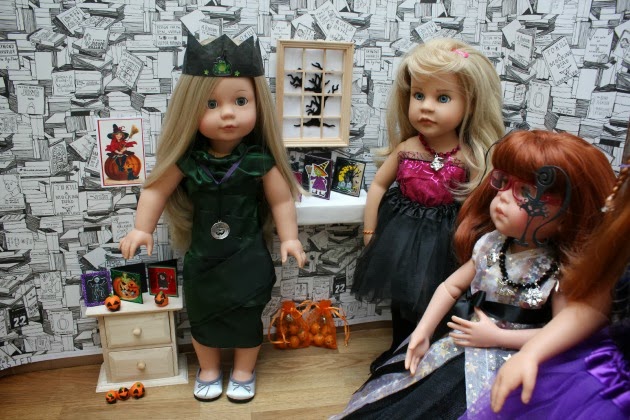 It was getting late and Halloween was well underway with trick or treaters knocking at the door every ten minutes or so, and having their treat bags filled up by Jessica. Then there was a knock which they had become accustomed to, but when they opened the door this time there was no one there. They closed the front door and as they did so all the lights flickered. Thinking nothing much of it the girls carried on with their charades, it was Giselle's turn and she was in the middle of acting out  'The Wizard of Oz'. They stopped their fun suddenly the instant there was a flash of light from the direction of the window. Sophie said, "did you see that?". 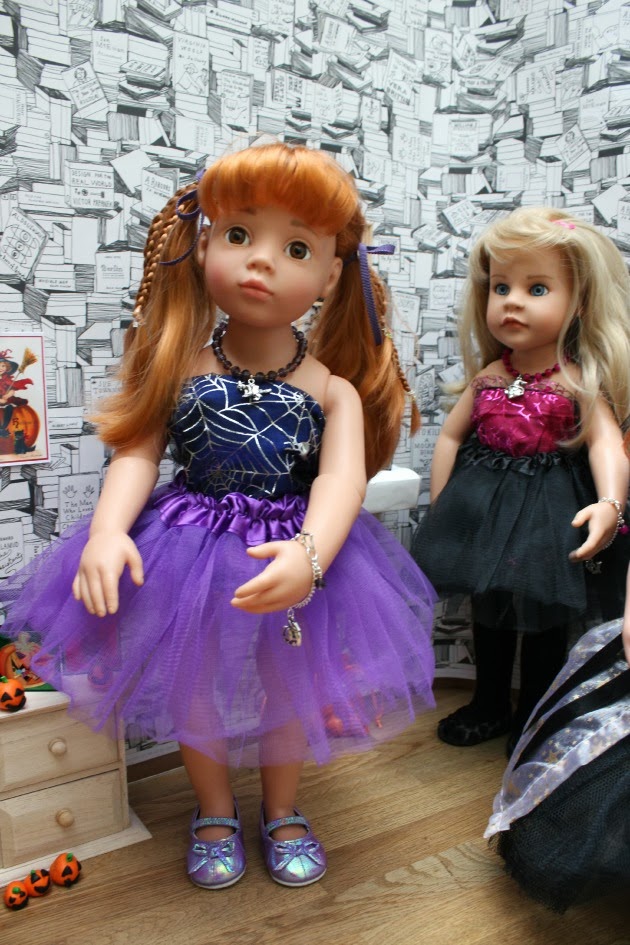 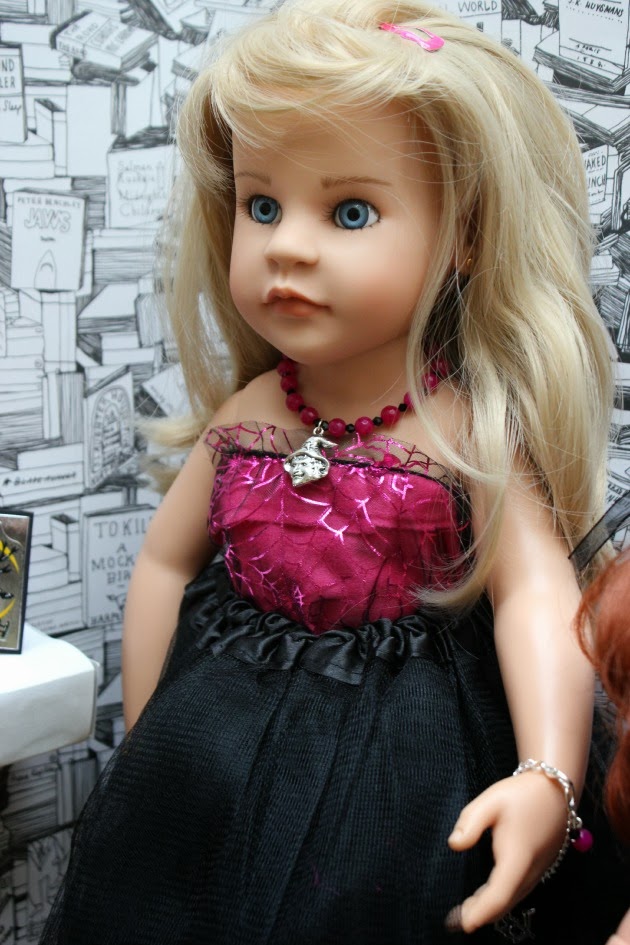 "Yes I heard it too, Sophie". Just then there was a cacophony of owl hoots and flapping wings; it was unusual to even hear one owl at Jessica's house in the city suburbs. "Follow me, let's take a look at the window, see what's there" said Jessica. 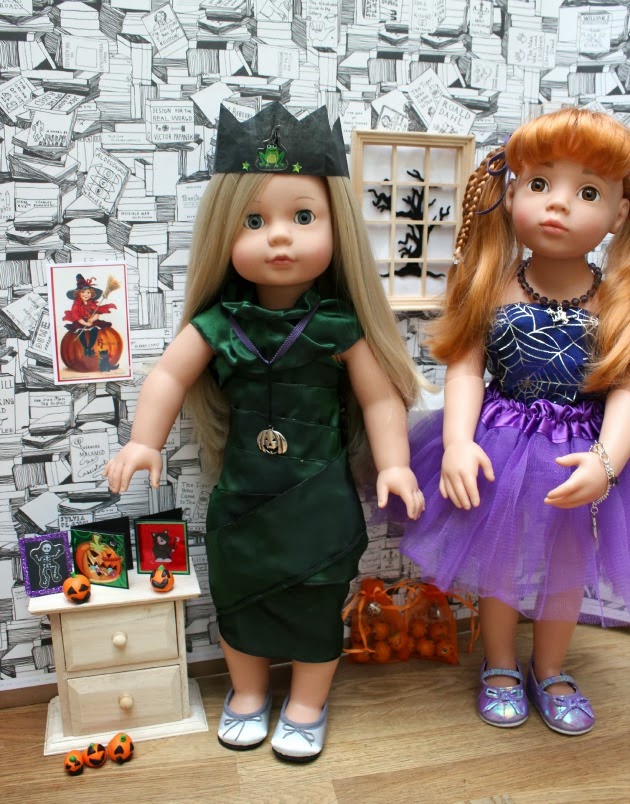 "I'm not coming if that's alright. I'm a bit scared" said Marlies. Sophie said, "stick with us Marlies, it will be better than being on your own". Marlies, very frightened, went to the window too. 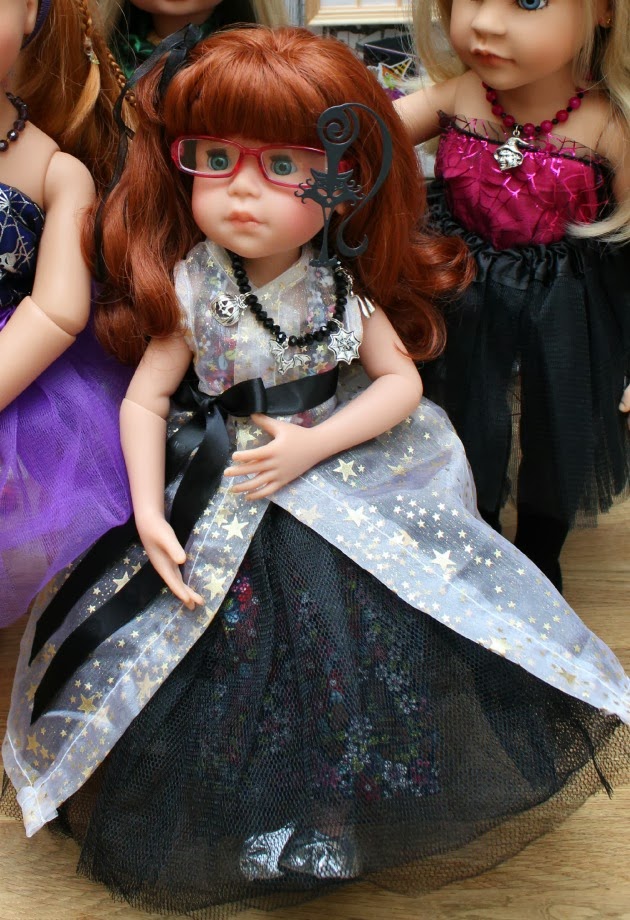 It was dark outside but alarmingly they could just about make out a shape moving about. Jessica said, "there's someone there". 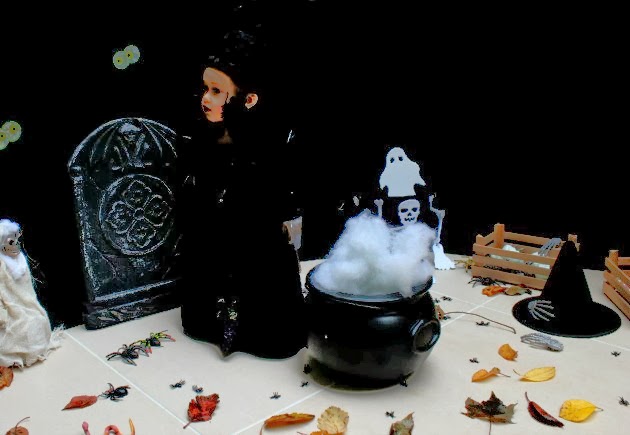 As they focused the shape became clearer to make out. Jessica's whole back garden was unrecognisable, nothing of hers, like her bicycle that she knew she had left in the garden was there anymore. Someone was moving about in the dark and there was a large black pot with a bubbling mixture in the centre of the what would have been the garden. White 'things' were floating in the air around the pot. 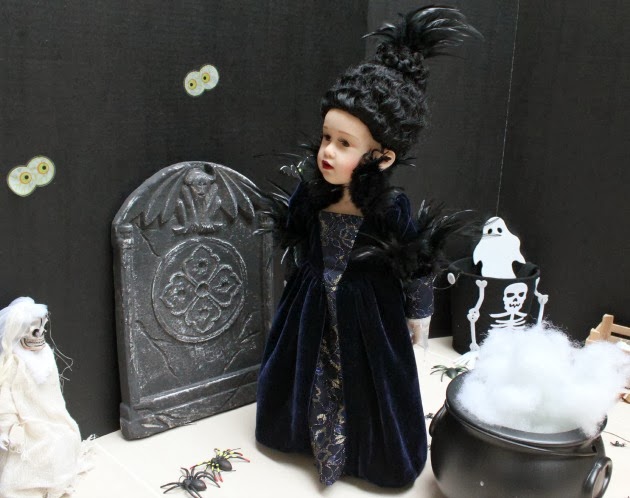 The girls hid behind the curtain so as not to be seen; they watched dumbstruck. 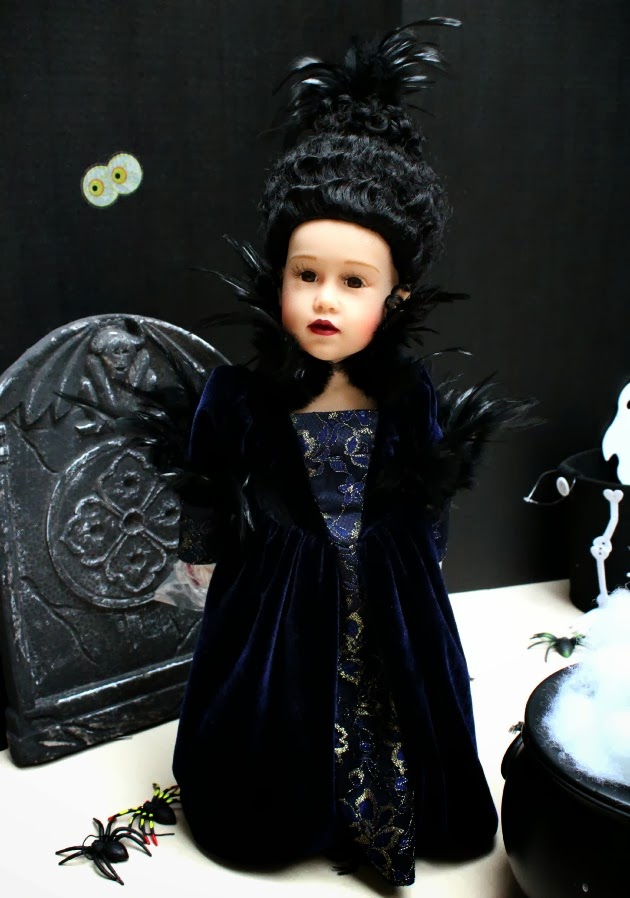 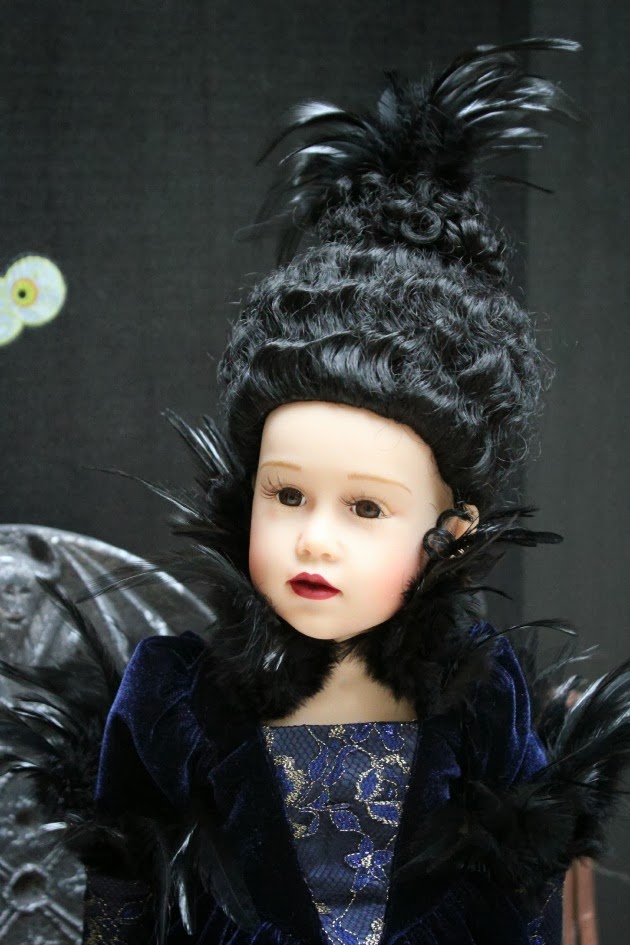 She was very beautiful. Who was she and what was she doing though? She didn't look bad, her eyes looked gentle; she looked more regal than scary. 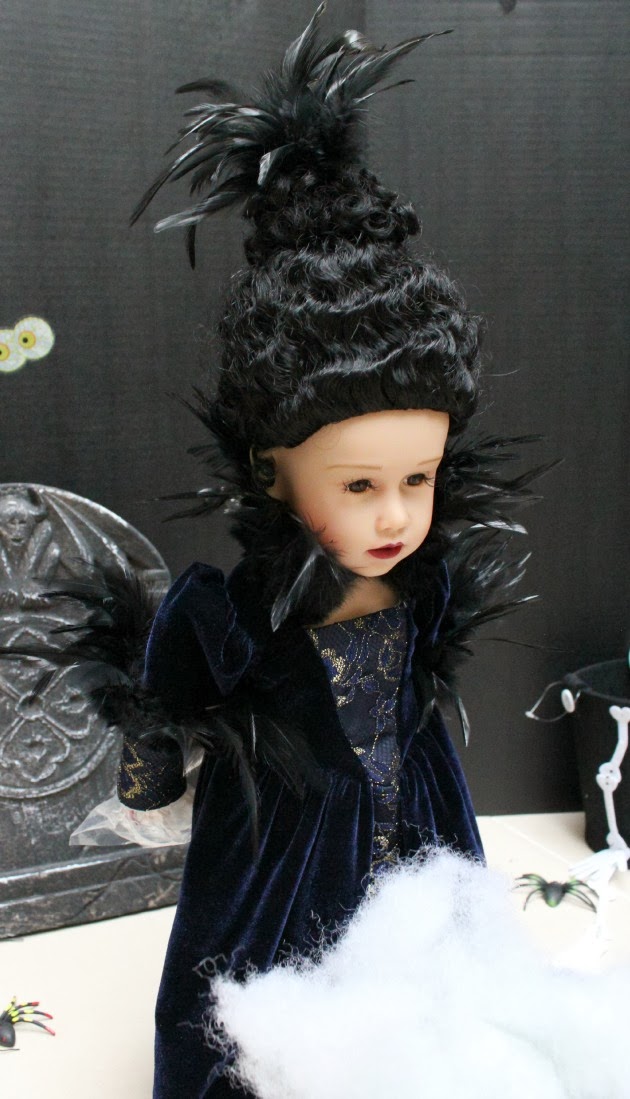 She stood over the bubbling mixture. 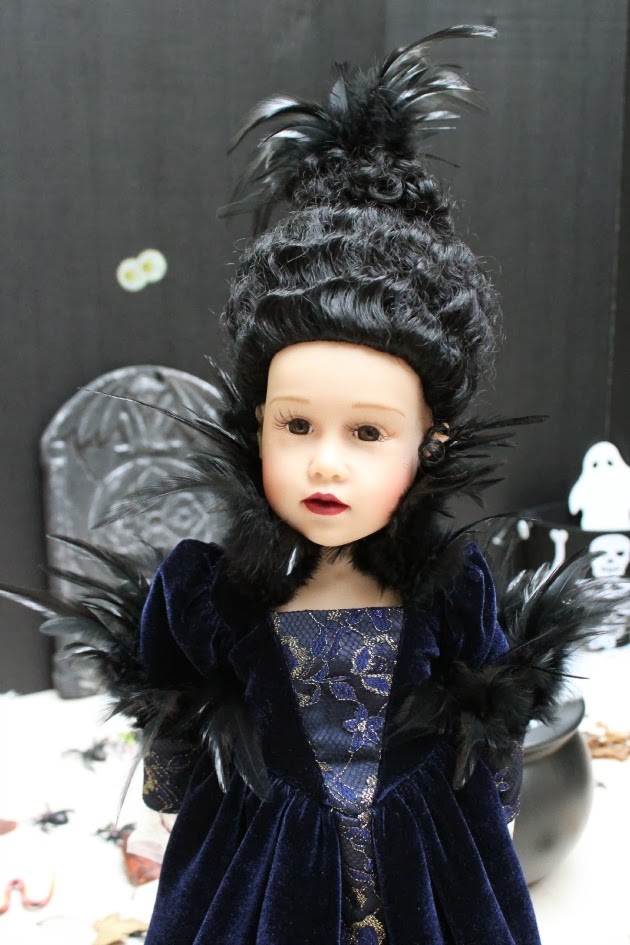 Then, she looked directly at them, into the window. As quick as lightning she disappeared into the blackness of the night. 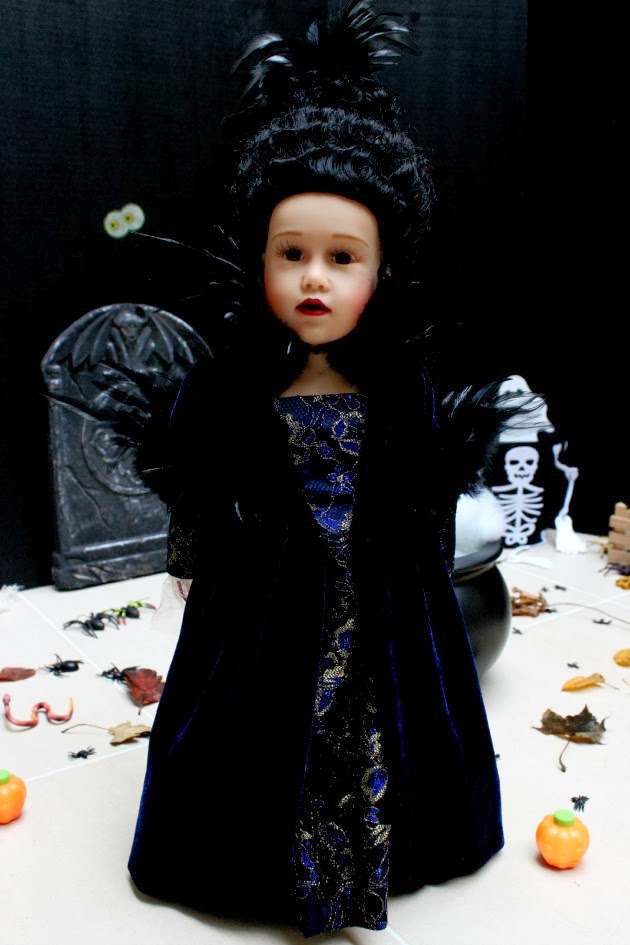 And she was gone. Jessica's back garden returned, just as she knew it with her bicycle chained up on the left and her shed on the right. 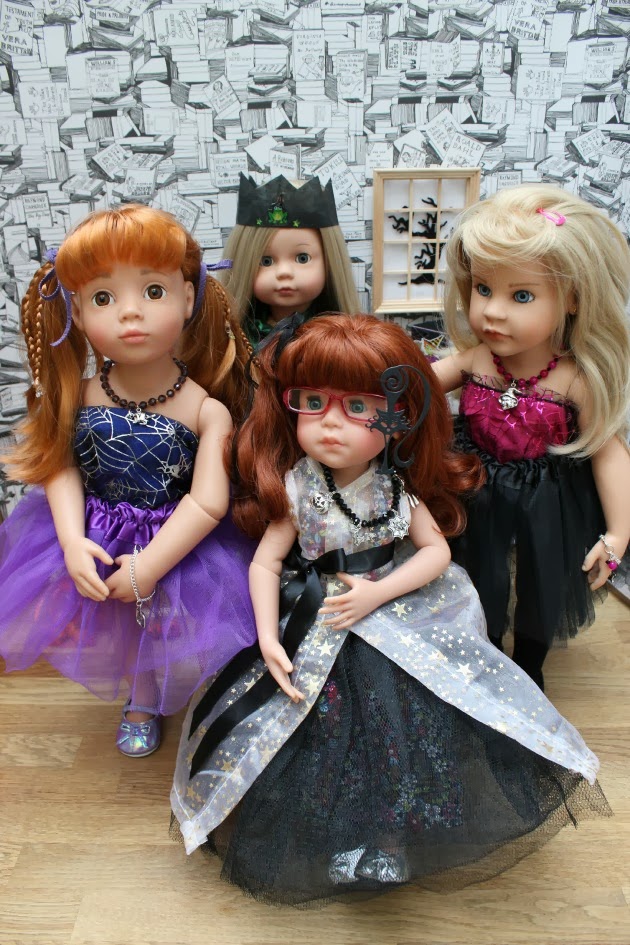 Marlies had had her eyes closed throughout. "What did you see?".
"Magic, Marlies" Giselle answered.
"I think we just saw the Queen of Halloween" whispered Sophie.

(Thank you very much to my Ruby Wedding friend for this beautiful doll jewellery and all the wonderful Halloween cards you see in the photos).