I've been admiring the Harmony Club Dolls for a while; their facebook page is alive with beautiful portrait photographs of their girl dolls and their following is over 18,500 facebook fans, which is huge! It was a delight for me to spot them at the New York Toy Fair and to be able to take a good look at the collection of eight dolls which include in order from left to right, Sara Grace, Jazzmin, Joy, Melody, Song Li, Cadence, Lyric and Pirouette.

The Harmony Club booth was nestled in beside Sophia's Heritage's larger booth in the exhibition hall on the ground floor, yet the dolls held their own displayed against the black curtain, lined up in their attractive clothes looking directly at the show's visitors.  Their long thick hair, red-hued painted lips and array of jewel coloured dresses drew me in.

These are not the first dolls the company has sold but these dolls are the first they've designed and manufactured themselves.  The prototype doll that they first photographed for their facebook page nearly a year ago brought excitement and a long wait for those fans who had their sights set on one. In October 2012 the first dolls arrived in time for a fantastic Christmas period for the company.

The great thing about going to the New York Toy Fair and meeting Bill was being able to chat about how this stunning collection of 18" dolls had been designed.  Karen, Bill's wife, is the creative brains behind the doll brand and according to him 95% of the ideas and application has come from Karen. He has a different day job and during the design period would return in the evenings to give his opinion on the latest tweak Karen had made to her digitally designed doll face.  For the Harmony Club Dolls' faces were designed on a computer graphics programme based on images studied on the internet of girls' faces.  Measurements of attractive facial features were taken from the photographs and applied to the work in progress Karen was developing on her programme. It's a clever way of creating a play doll face mould and later the programme became a useful way of checking that the prototype at each stage of manufacture was being made according to specification. Hats off, the doll face is absolutely fresh and unique and somehow manages to tick lots of boxes.  Perhaps you'd like to comment below on what you think the 'special something' is these dolls have?  I suspect the comments will give a variety of very interesting answers.

In terms of their bodies, the measurements are comparable to American Girl dolls at 18" tall.  Other similarities include wigged hair, 5 points of articulation (head side to side, arm and leg ball socket joints) closing eyes, open mouths showing two painted teeth and fabric stuffed torsos. In the USA the (ms)rp of a doll from Harmony Club Dolls is $75-$85.

The display of the dolls at the fair was very easy on the eye: the four dolls to the left of the middle were dressed in pretty dresses and to the right there were four dressed in more fashionable clothing, purposely appealing to many. 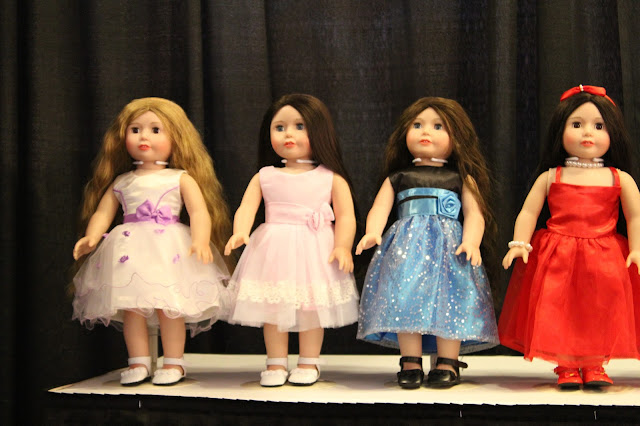 Take a look at Song Li the tap dancer in the purple dress, the company's tagline is Play Dolls for Little Dancers and Fashion Girls and is inspired by their 5 year old daughter who loves to dance so expect to see plenty of this sort of costume, fun and frolics in the future! 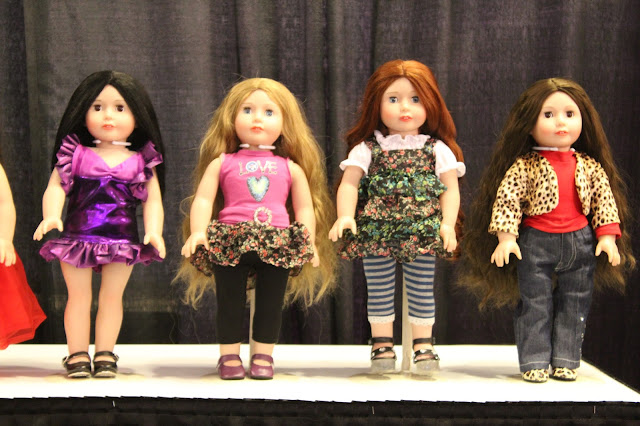 Their 'X factor', for me, is the versatility of the Harmony Club Dolls.  The dolls as comfortably wear pretty dresses as they do trendy outfits.  Not only that but Diana Gash's photograph entries (February 2013) into the Harmony Club Dolls' monthly sewing contests to win a doll (which is being run on Harmony Club's blog)  shows the dolls dressed in historical clothing. They look very credible as historically outfitted dolls. It's quite an achievement to create a doll that can accomplish such a variety of transformations through clothing and do it so credibly.  Can you think of any other doll brand that achieves this with its dolls?  Yes, I can think of just one in the USA too!

Harmony Club Dolls work with doll clothes designers like Gale Sicard who makes eye-catching gymnastic leotards for the company. Sandra Brown of 123 Mulberry Street has just started designing trendy fashions for Harmony Club Dolls and I for one can't wait to see what comes out of this collaboration!

Harmony Club Dolls is a forward thinking energetic motivated exciting young business with big plans.   I knew this when I met Bill because he's one of those people who listens twice as much as he speaks, whilst remaining engaged and engaging the whole time.  If his contribution only reflects 5% of the potential, then this doll business is really set for growth!  Testament to that is the level of enquiries from large US retailers the company has received in the week since the show, I've just heard; it's certainly a very exciting time for them.

Of course I've saved the best news until last, though!
It's an exclusive: Harmony Club Dolls will be available in Europe for sale for age 3+ as of April. The  dolls are undergoing European testing as we speak and we are absolutely delighted to be introducing Harmony Club Dolls to our customers in the UK.  Our pre-order list is now open for the first shipment of Harmony Club Dolls to My Doll Best Friend.  For customers wishing to be sure of a doll we recommend you send an email to [email protected]  Further updates will follow as the news comes in.