This year My Doll Best Friend visited the New York Toy Fair 2013 at the Jacob K. Javits Center in Manhattan in the quest for doll news and to see if I could buy new items for our doll shop.  I'm going to run a series of features relating to this trip; this one is all about my experience of going to the New York Toy Fair in 2013.

There was a touch and go moment the day before the flight departure as weather reports indicated that the New York tri states were at the centre of a blizzard leaving areas under up to 3' of snow.  All flights from London Heathrow were cancelled to New York JFK airport on Friday 8th February and there was no news about our BA flight out until a few hours before it left on Saturday.  I packed my snowboots and ski trousers as I know that New York can be cold as I've experienced the 'wind chill' factor there before!

When the plane landed I could see about 1cm of snow on the ground which is about what I expected, afterall it's an airport and planes and snow don't mix so obviously equipment would have been used to clear the snow.  I moved through immigration (30mins- not 2 hours this time- cool!), collected my bags and went to get a taxi.  Surprised to see no snow, just very wet ground we headed to the hotel I was staying at on 35th Street. Hard to believe that just along the sides of the roads were banks of snow but none on the roads or the pavements.  I'm used to the UK where snow stays where it falls until it melts!! But no, the New York Sanitation Department had literally sent out equipment on the roads and pavements to MELT the snow! Ok, so this is Manhattan and business is business- everything is done to keep Manhattan moving.  The other two New York states were still under several feet of snow- still an amazing achievement.

So here's my first photo in New York of Fifth Avenue taken the day after the blizzard. No snow!!!

I did a bit of shopping- in that shop with the red canopies on the right, recognise it?!  I came out of the American Girl Place not with Saige, the American Girl Doll Of The Year but with a cute girl and doll matching outfit for my daughter- something fairly challenging to buy in the UK.  I have lots of cute dolls already! 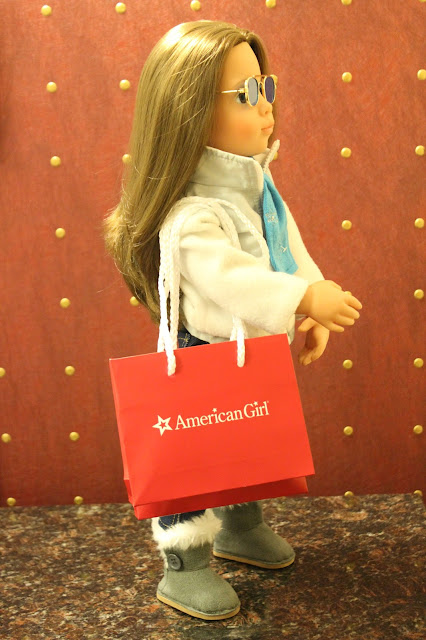 Here's Clara carrying our shopping, about to step into the hotel lift at the end of our afternoon of retail therapy.

Early the next morning I headed to the Javits Center which was at the end of 35th Street so a very easy 10-15 minute walk.  My first glimpse of the Toy Fair was this: 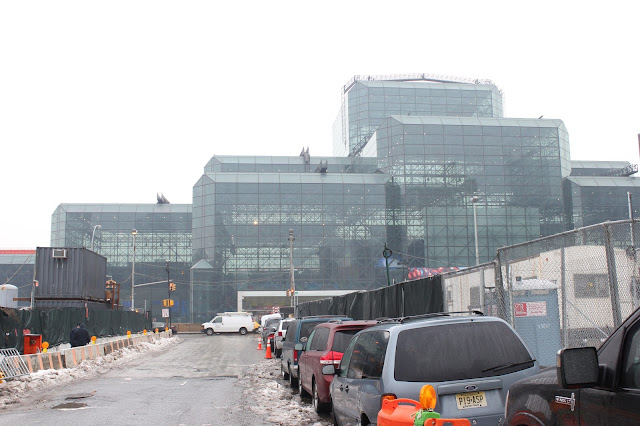 So the road goes no farther, the Javits is at the end and on the other side of this huge glass building is the Hudson River.

I'm not sure what the sprawling construction works on both sides of the road will eventually be, perhaps it will be up by next year.  If you go, let me know!

On entering the Toy Fair this is what you saw: 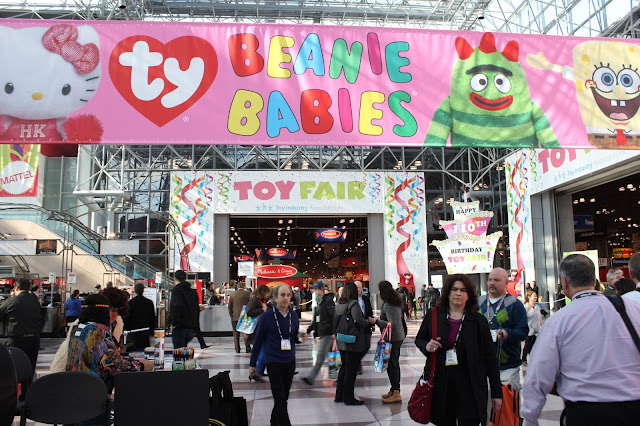 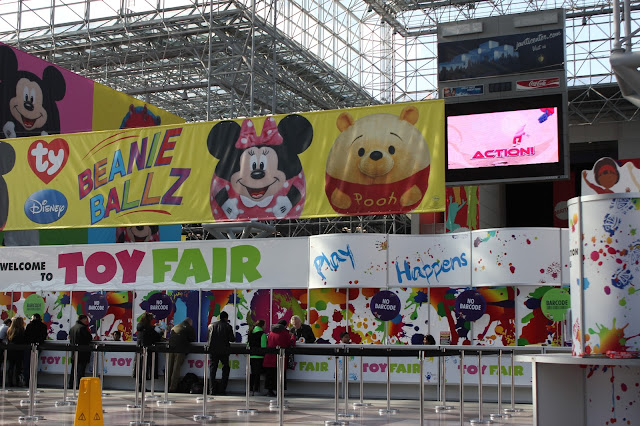 The structure of the building meant that there was plenty of light in the foyer and it was quite hot! That wasn't helped by my being dressed for arctic combat!  Despite the lack of snow outside, it was very cold.

Stairways/ escalators led down to the food hall and another floor of exhibitions; in total there were two floors of exhibitors,  with Mattel having a 'Barbie booth' all on its own high up in the heavens. 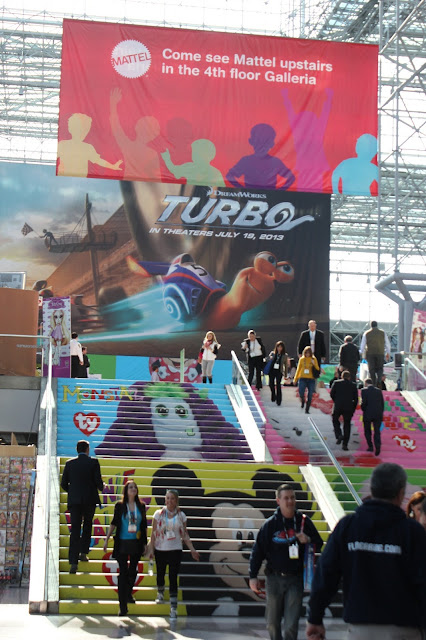 As you'd expect, lots of advertising- this is one of my favourite views of the adverts, it's a little more creative than an overhead banner (oh, I see that as well!!).

Lots of toy demonstrations were dotted about the foyer areas, but it wasn't just toy exhibitors and coffee stands that could be found in the foyers.  The exhibition center was filled with music- these guys were so talented I bought their cds!  The band is called Underground Horns. 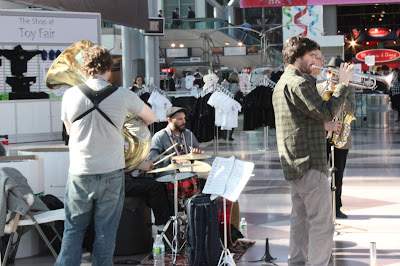 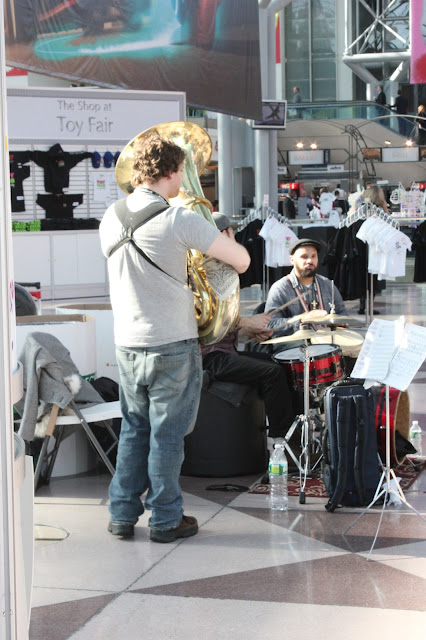 Inside the exhibition hall on the ground floor were the premium booths. So, plush carpet, average lighting, low ceilings and beverage stands along the back wall.  I got rather into fruit juice smoothies as it was so hot in there and hard to tear myself away to be bothered getting food!  In the basement the exhibition booths had to put up dim lighting and lower ceilings- and no plush carpet!!

In this photo you can see 'Dolly Aisle' - actually I discovered that there were 2.5 dolly aisles- but the 0.5 I didn't find until the last day!  Exhibiting here are the Queen's Treasures, Kathe Kruse, American Doll Rooms and Heart & Soul (Kidz 'n' Cats). Back to back with this aisle were booths for Sophia's Heritage and Harmony Club.  Adora dolls had a square booth on the end which had access from both aisles.  Madame Alexander was over in a different location on the ground floor. The doll aisle I came across on the last day had Rosalina, American Apparel, Laurent Doll and The Doll Maker. I'll write more about some of these brands I've just mentioned in subsequent features. 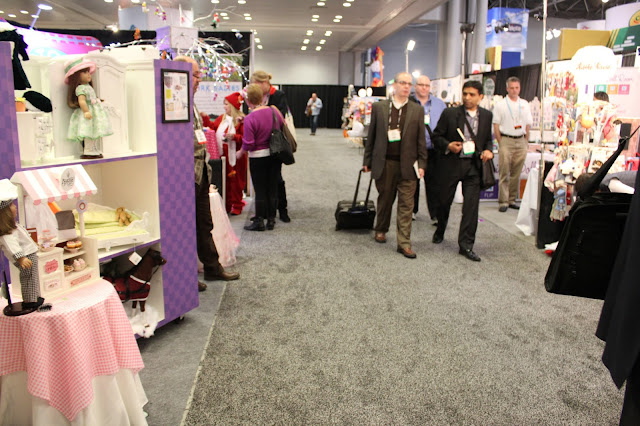 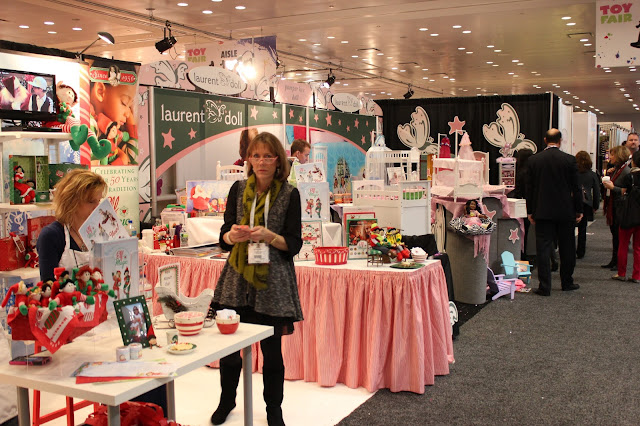 Still ground floor but poorer lighting for these booths.  If you're planning on exhibiting at the Javits Center it helps if you're on an aisle with good lighting as all visitors want to take photographs and good quality photos of your products at the show can really help your brand. Or, take your own lighting like Heart & Soul did- it comes in useful!

In the basement were newer toy brands, a few manufacturers from the Far East and lots of toy demonstrations.  Another couple of doll brands were down here:  Paradise Girls and Lottie.

The highlight of visiting the show for me was meeting the people behind the brand names and talking to them about their products and what's out next!

Prior to leaving for New York, Char of Doll Diaries arranged a meet-up for us where I was also lucky enough to meet Sarah of College Savings Dolls, too.  If you follow on facebook you'll know this already as I posted photos from the show onto the facebook page.  Char travelled with her best friend Jeri and Sarah was with Patty.  Sarah, myself and Char jumped into a photo as a memento at the end of lunch: 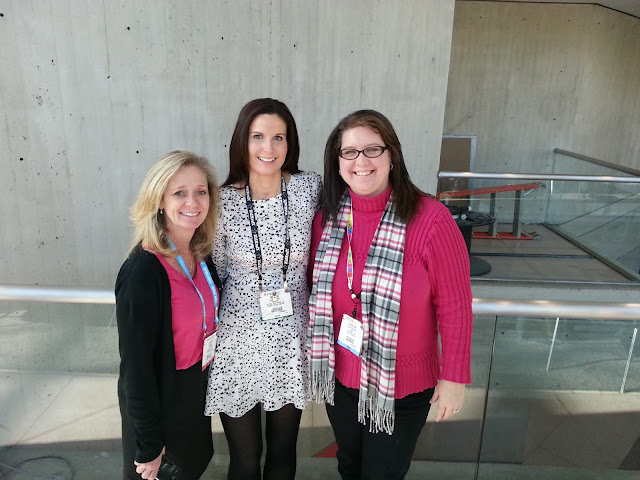 It was a pleasure to meet all those at the show, everyone brought vibrancy, enthusiasm and was brimming with ideas for business.  It was however really special and fun meeting Char.

On the final day of the show I was amused that such a lot of trade went on between the store holders. It was literally 'I want that for my son/daughter/shop, what do you want from my booth that we can trade?'   And why not?!

In the final closing moments of the show on the last day the Children In Need charity workers assembled to organise the collection of toys from brands like Kidkraft and Guidecraft.  These two brands also donated their show goods to Barnardo's after the London Toy Fair. 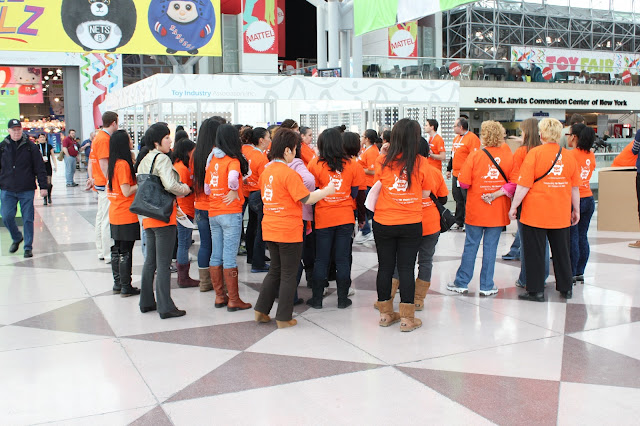 At the end of quite a long day (and I went each day), heading back from the exhibition halls out into the daylight of the foyer felt great.  The sound of the music playing, the aroma of coffee and the view out through the large glass doors of New York City was all I needed to switch from work mode to tourist!