It's always exciting waiting for the new Gotz catalogues to arrive, wondering if Gotz has added any new dolls or perhaps any new collections!  Gotz afterall make some of the best quality play dolls in the world and lots of credit must go to the daughters of Marianne and Franz Gotz who now run the company. Their creativity as well as business acumen to still run a successful family business into its seventh decade is inspirational to me and aspirational for many.

This year, like last year rather fabulously and excitingly they have increased their doll collections!  Last year we had five new posable Happy Kidz dolls, with full vinyl bodies and nine joints.  Now I wonder what we ever did without them!!

This year Gotz have continued that range, with some changes and have introduced the Classic Kidz doll collection of four dolls for 2013.

It can all be very confusing so let's run through the similarities and differences between the Happy Kidz of 2012 and the new 2013 Happy Kidz and Classic Kidz dolls.

Gotz Happy Kidz and Gotz Classic Kidz stand 50cm tall with full vinyl bodies with nine joints and their hair is rooted. There's Clara, Emily, Katie, Anna and Sophie.  In 2012 there were two face moulds in the Happy Kidz collection: Katie and Emily, and; Clara, Sophie and Anna. In 2013 there are now three face moulds, as above except that in 2013 Anna has teeth, giving us the third face mould.

The face mould of Happy Kidz Anna from 2012 (one of my favourite dolls) now only features as a Classic Kidz.  She is joined by Laura (who looks like Clara 2012) and Luisa (who looks like Emily 2012). There's a new doll who I've only seen in the promotional photograph called Vroni and again she resembles brunette Clara. This Classic Kidz collection is possibly the one Gotz might have been better bringing out last year first and then introducing the more affordable Happy Kidz collection- but what do I know?!  In terms of their prices, the Classic Kidz retail at £129.99 and the Happy Kidz at £79.99.

Anna 2012 is a beautiful doll, rightly spotted by Gotz which is probably why they now have her retailing at £129.99 in the Classic Kidz collection, by the name of Lena.  She will be in demand this year because of how beautiful she is. 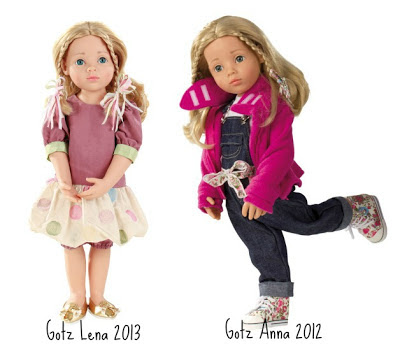 It is worth pointing out that Anna from last year is still in stock in the shop at £79.99 which is considerably less than Lena who will retail at £129.99.  So, if you don't want to pay the high price of Lena but would love a doll with her looks, you can still just about buy Happy Kidz Anna 2012.

Katie from Happy Kidz 2012 is basically the same as new Katie, just with a new outfit.  I think, from seeing her at the National Exhibition Centre in early February that her lips are pinker than 2012 Katie's more nude colour. 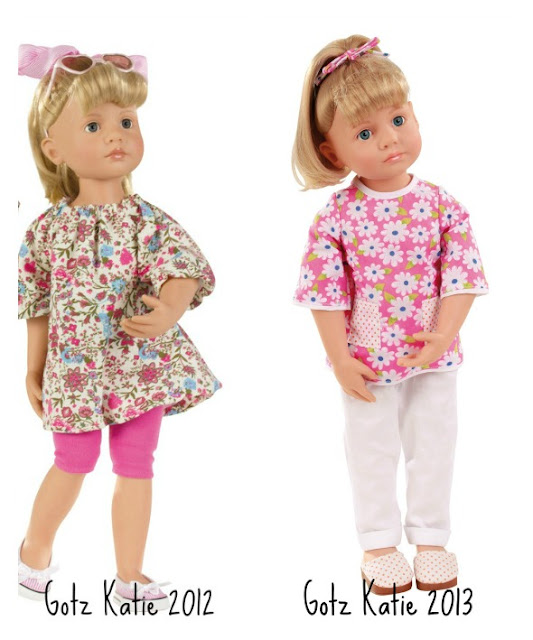 Emily in 2013 looks similar to Emily in 2012, perhaps she has shorter hair and the parting is now central rather than on the side.  Luisa, a 2013 Classic Kidz has the same face mould as Happy Kidz Emily 2013 but with longer hair, parted on the side and a very pretty outfit. The (msrp) rrp of Luisa is £129.99- and Emily is £79.99.  There are still a few 2012 Gotz Emily dolls in stock which share the longer hair of Luisa with the side parting. 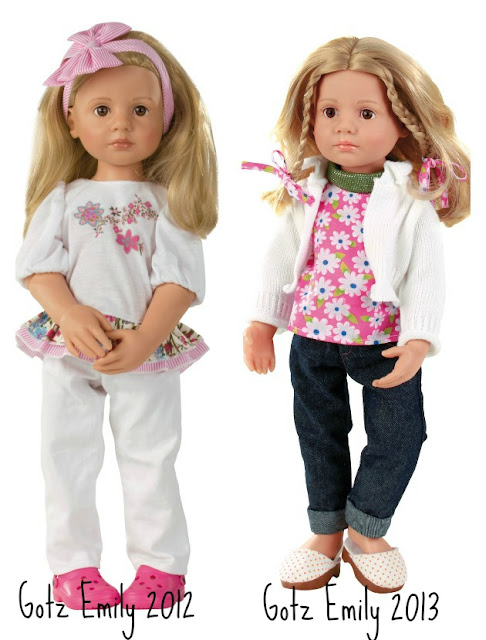 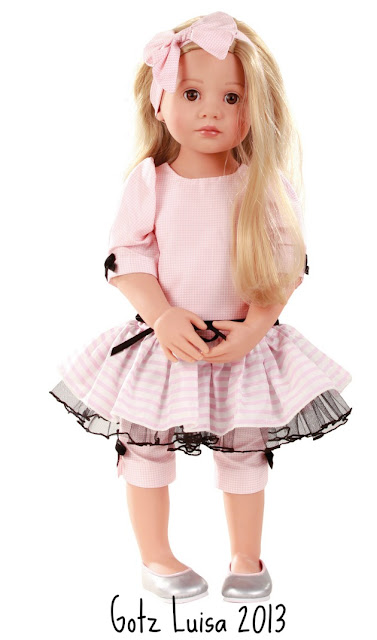 Clara of 2012 Happy Kidz had no fringe (bangs) but Clara in 2013 now has a fringe.  The same fringe-free 2012 Clara is a 2013 Classic Kidz called Laura, retailing at £129.99 and wearing a very pretty new outfit.  She's a photogenic doll who models lots of the clothes on the My Doll Best Friend website. Some 2012 Clara dolls are still available at the time of writing this feature at £79.99. 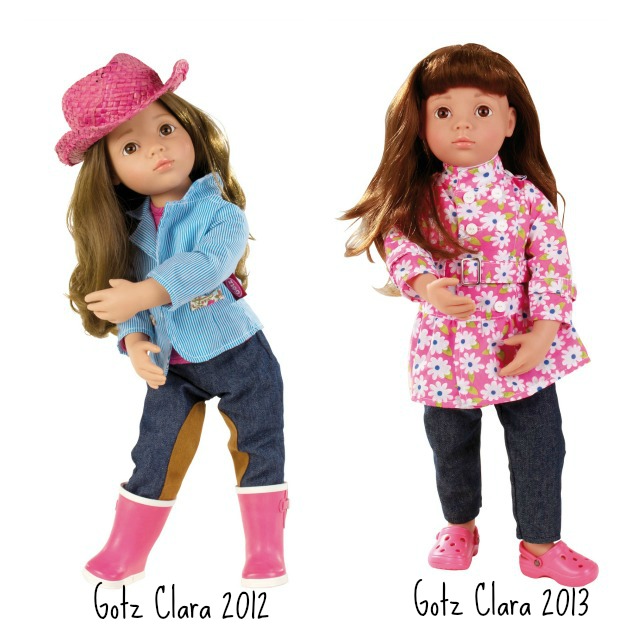 Beautiful Sophie from 2012 now doesn't exist as I mentioned above. What a pity I think! You will continue to see beautiful Sophie on the website as we have one doll for ourselves who models our outfits- we just have the stock left from 2012 then all gone.  I hope that in 2014 Gotz re-introduce a red-haired articulated doll (I hope you're reading Anke, or Uwe!).

Sophie does still exist in the Happy Kidz collection for 2013 but now looks like 2012 Clara with brown hair and no fringe.  She's wearing a ballet outfit just like the ever popular Gotz Hannah at the Ballet.  This increases the Gotz ballet range to: blonde haired, brunette, afro and asian haired dolls.  I'd like to see the latter two made into mult-articulated dolls for the Happy Kidz range, please? Oh, and a boy doll but with a new face mould!  That's my fairly modest Gotz wishlist- my extravagant one is very long! 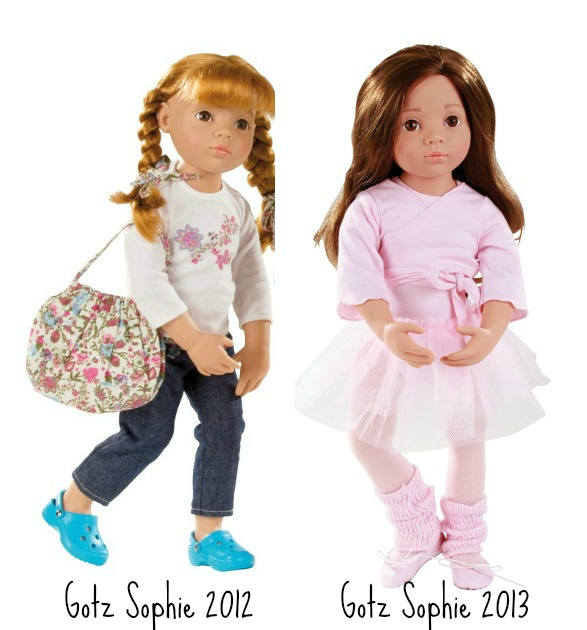 So, who else is there that I've not mentioned?  There's a new Classic Kidz doll called Vroni who I've not seen but think is brunette and shares the Clara face mould.  She wears a traditional Dirndl dress which can also be bought separately and Vroni retails at £129.99 like the rest of the Classic Kidz. 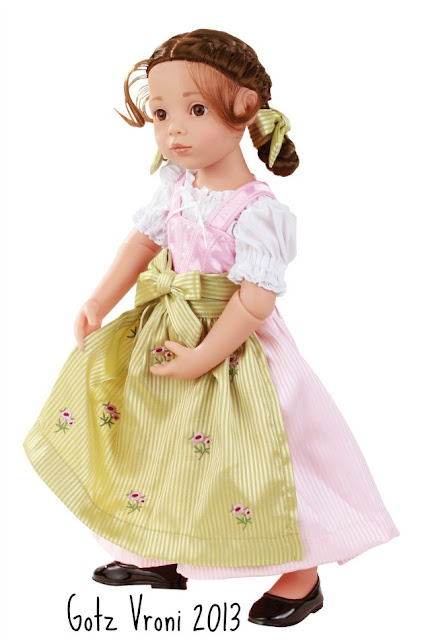 That about wraps up the new Gotz collection of Happy Kidz dolls and Classic Kidz dolls for 2013.

As for our own 2012 Anna and Clara I think we'll have to re-name them so as not to add to the confusion in 2013 when we run photo stories.  If I can bring myself to do it (also need daughter's permission as they're hers really), my Anna might be known as Lena and Clara as Laura as those are the dolls in 2013 that the Happy Kidz Anna and Clara of 2012 are most similar to.

My daughter is not too happy about the re-naming as she loves the name Anna and doesn't want to have any of her dolls re-named, especially Anna.  I suspect this may go down the route of 'doll compensation' when the new dolls arrive!!

I'd love to hear your thoughts on this feature and the new Gotz dolls.