The store will not work correctly in the case when cookies are disabled.
IMPORTANT: ALL CUSTOMERS NEED TO RE-SUBSCRIBE TO OUR NEWSLETTER IMMEDIATELY TO CONTINUE RECEIVING IT. THANK YOU!
Menu
Account
Settings
Language
UK Store View
USD

My Doll Best Friend At The Mums Show Live! 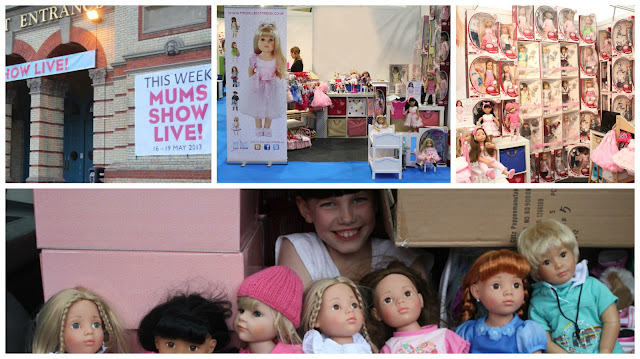 My Doll Best Friend exhibited at the Mums Show Live! at Alexandra Palace in North London between 16th-19th May 2013. The venue was built in 1873 as a public centre of recreation, education and entertainment and has the best panoramic views of London. This Summer the venue will celebrate its 150th birthday. The original Victorian theatre and stage structure are on English Heritage's 'Buildings at Risk' register. The people's palace, as it was dubbed, is well known for housing the BBC television broadcasting studios until recent years. It now hosts shows and exhbitions, pop concerts and fairs throughout the year.

The Mums Show Live! was designed to follow on from the baby shows for those parents whose children were out of nappies and into the full swing of childhood play. The events, talks and exhibitors were most suitable for parents of 4-12 year olds and of course the children too. Celebrities included Carry and David Grant from children's television who entertained the children in the Inspiration Theatre with lots of singing and dancing. For those adults who wanted to have some 'me-time' at the show there were people to tidy your eyebrows, whiten your teeth and give you a manicure.  There were also talks you could attend for example, invaluable tips were given to get those interested in setting up their own blogs, and there were many helpful sessions about parenting pre-teens. 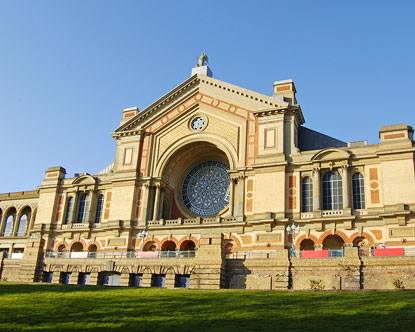 The calibre of exhibitors at the show was very high, with a good range of 'not on the  high street' brands.  I was helped by a great team; Lisa, Sarah, Harriet and Natalie- thank you enormously girls!

We all got fixed up with various goodies at the show: Sarah bought beautiful garden furniture; Lisa  bought a name label tagging machine for her kids' school uniforms (no more sewing on labels!) from Easy 2 Name  (this is great); Harriet got her eyebrows shaped and Natalie got her hair straightened! Natalie also recommended and got a discount (for me!) on a super new iron that apparently 'makes you feel like you are not ironing'!  My daughter played for hours with a new non-sticky play dough called Sqwooshi (out in July), bounced on the huge trampoline and bought Kids' paraban free deodorant, Keep It Kind (also in Boots Chemist).  She ate her own weight in ice-cream and made lots of badges at the Brownies!  I bought her some funky wearable t-shirts that look like Moschino, by Painted By Me-  which are far more unique than Gap Kids where I buy most of her clothes.

The downfall of the show was that it didn't have the anticipated footfall so was quieter than everyone had expected. We were there for four days though, so all in all we had a successful experience, met some of our existing lovely customers and met many more people who became customers at the show.  Lots of fliers were handed out too, so I expect to see many promotional codes entered into the checkout process over the next few months! 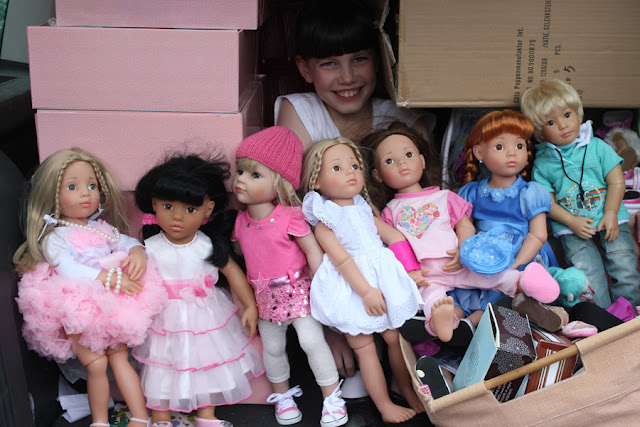 We took a few dolls with us (mine is at the back in the middle!) for the children to play with which they loved!  We don't have our most popular at the show dolls in this photo as they were sold! Yes, Jessica and Buzzin' About were very popular and two little girls couldn't put down the dolls they had in their hands so we had to let their parents buy them! My daughter was very good about letting the other little girls take her dolls, she made me very proud, though she did understandably have a wobble about it at home later! Needless to say, other dolls have since joined our doll family, more about that another time!

Gotz Happy Kidz Clara 2012 and Sophie 2013 (the same model of doll) and Gotz Hannah Princess were our most in demand dolls after the Precious Day dolls though the Kidz 'n' Cats dolls were taken home by lots of customers too- the boy dolls were popular.  We had super-sized carrier bags which fit in two dolls for the shoppers who appreciated our show prices!

I did say some of our lovely customers came to see us; here are two of them! I wish I had taken more photos, another of our customers even brought her Harmony Club doll for me to meet- it was a real highlight and that would  have been a good photo.  She also came with a box of chocs for us, so generous- thank you, they were delicious and we ate them while we worked! 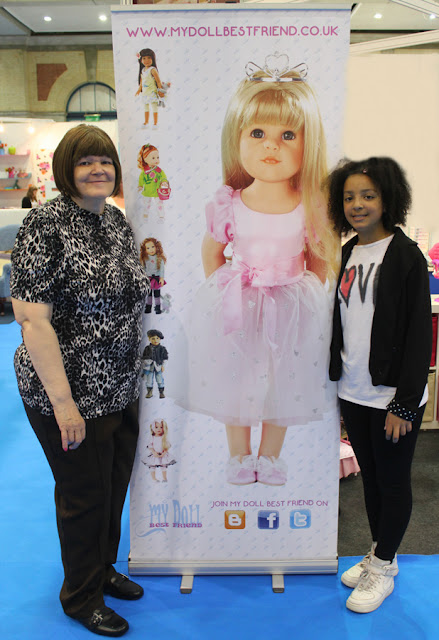 The fantastic roller banners (there's another one in the photo below), fliers for the show and other printed material was designed and made for us by Jenny at Wee Print; I am absolutely delighted with it all.

We took some girl and doll matching pettitcoats to the show and these were very popular. One little girl who loves leopard print took a matching set away with her- she looked so cute when she tried it on! Mum if you are reading please send us a photo of the cuties!

Here's our display at the show: 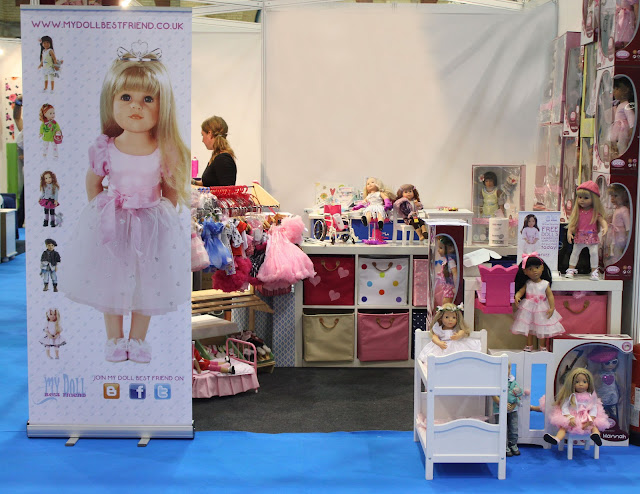 Another photo of our display, re-stocked this time! 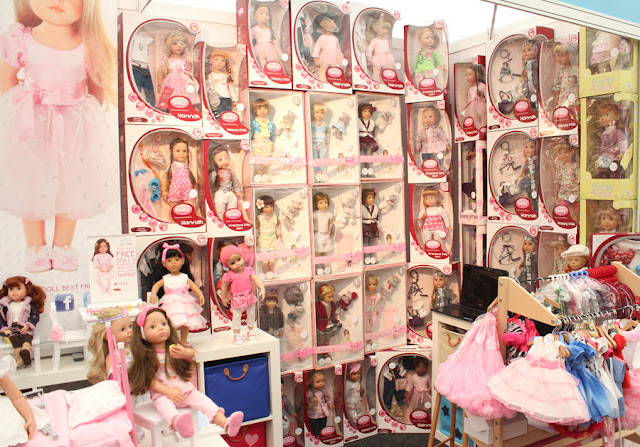 There was good comaraderie at the show amongst the exhibitors and it was lovely to see Frances again, from A Girl For All Time.

Thank you so much to those of you who did come, it was a real treat to see you in person and put names to faces- and give out some hugs!

A little stock is left following the show and it's being offered at a special price for a very limited time until we get back to our usual stock levels- some of you have already spotted this!

Categories: Brands & In The News