Sonja Hartmann showed her 2014 Kidz n Cats doll collection made by her company With Heart & Soul at the Nuremberg Toy Fair last week. It was wonderful to see the highly anticipated beautiful collection in person and have a chance to take a few photos.
This year Sonja has continued 7 of her popular dolls from 2013: Sophie, Grace, Alister, Jakob, Lena, Carlotta and Laura. She has also made way for 7 new dolls: Jolina, Princess in Pink (2014), Miu, Jodie, Julia, Paulette and Teresa. Sonja has added furniture to the Kidz n Cats range which will become available later in the year- August/September. It consists of a doll bed, table and 2 chairs, 2 chairs that can be purchased separately and a wardrobe, all in gloss lacquered white wood finish. The furniture and clothing in the Kidz n Cats 2014 collection will be the subject of another blog article.
The doll collection has reduced in size this year- from 18 dolls in the collection in 2013 to 14. The aim of the brand at the end of last year was to bring production to Berlin hence the more manageable reduced collection. However, it is now anticipated that production of the collection will return to China in the near future so that Sonja can concentrate on the creative side of her work in her studio. Sonja clarified that the Wish Dolls will always be made in Berlin.
There was one more additional doll to the 18 in the published collection in 2013- the Wish Doll Henriette, limited to 300 pieces worldwide. There will be additional Wish Dolls this year, starting with Aletta on 8th February. The With Heart & Soul team particularly like Face 1/ 'Slim Face' and all the continued dolls from 2013 have this face type, plus 2 of the new 2014 dolls. Jolina and Princess in Pink share this face sculpt.
There is a new supplier for wigs this year and Sonja remarked on how durable they appear to be. She is always doing little experiments one of the latest experiments has been on the wigs. She has been dampening and curling the new wigs with rollers she says with good results, they have been holding the curl well and looking very pretty. In terms of the curl falling out again- "no it does not". So some experiments will need to be done to work out how to get the curl out so that it can be styled and re-styled many times. I get the impression that she would like to find out what can be achieved with the new wigs. Sonja is very enthusiastic about her Kidz n Cats dolls as play dolls with hair styling as a big feature of doll play. After all, these dolls are primarily made with the intention of children playing with them, and it's children that she thinks of all the time when designing these dolls and talking about them. It's very much to her credit that adults enjoy them so much too.
Jolina , a new doll for 2014 has pretty blue eyes and brown long straight hair with a fringe.

Jolina is wearing clothes for Spring. I particularly like the lining of the yellow jacket as it has little fun pictures on the white background. Jolina's hair clips will not necessarily be pink and green, they will co-ordinate with her outfit but they might vary slightly. Her outfit is new for 2014.


Princess in Pink for 2014 has dark brown long straight hair and no fringe. Her eyes are blue. She wears the traditional Princess in Pink dress and shoes that can also be purchased separately. I was very taken with her when I saw her; she's a beautiful doll.

Miu is the first Asian inspired doll that Sonja has created for the Kidz n Cats range. Her face mould is Face 2 also known as 'Pouty', which was present in the first collection in 2009 and has appeared many times since. This year there is only Miu with this sculpt.

Miu is also the first girl doll to be given short hair.

Miu wears gorgeous clothes seen for the first time in this collection. She will be available later in the year, expected to be August - as she's dressed for the colder months.

Julia is a fresh new addition to the collection having the latest face sculpt, dubbed 'Angelic' by the fans. She also has new original clothing. Julia's is the fifth face sculpt and the one shared by the Wish Doll Henriette. Her hair is a different shade of blonde to Henriette's. You can see part of the new Kidz n Cats bed in this photo.

Laura was introduced in 2012 and won a DOTY AWARD for "Children's Play Doll". She has Face 1. Laura is a favourite with children and collectors alike. Sonja shows us how to loosen the ringlet type curls when Laura first arrives, in this short video. At the beginning of 2014 Laura was briefly made with blue eyes, though in the 2014 collection she is back to having beautiful brown eyes. Her outfit can be purchased separately this year.

Teresa is new for 2014 and we haven't seen her pretty clothing before either. She has Face 3, also referred to as 'Sweet' by fans and this face was first seen in 2010 with Tinka, Nikola, Marietta and Robby. There are lots of fresh and pretty colours for the dolls clothing in 2014 which I like.

Paulette is a very beautiful doll - I liked her much more than I thought I would, an opinion I had based on seeing her promotional photo first. She's gentle and sweet, having Face 5. Her outfit has been available to purchase for a couple of years and is therefore not new to the collection, but Paulette the doll is the first doll to wear the outfit. The doll takes the outfit's name. It can still be purchased separately.

Carlotta was a DOTY Award winner in 2013 for "Collectible Child Doll". She has a slightly different hairstyle this year. Last year she had a side parting with a fringe, this year it is a centre parting. Her face mould is Face 1. Her ribbon looks to be a different shade of plum, and different texture too. Her eyes look to be a paler blue than they were previously.

Lena has been available since the very first 2009 collection and has had changes in wig. Here she can be seen with very dark brown hair. Previously she had at least two other wigs- brown and golden-brown. She was made with blue eyes for a short time at the end of 2013. Lena has Face 1 and was first made in 2009-10 with 9 joints rather than her current 11. Lena looks to share the same wig as now retired Kiki from 2013. The dolls earlier than 2011 were shorter in height, measuring 46cm, but they are currently taller at 48cm due to a different composition in the vinyl.

Alister was introduced in 2011 as part of the new 11 jointed dolls, 2 more joints at the wrists than the earlier dolls. The lower arm was altered to fit inside the elbow, making it a neater joint. Wrist joints were added. Alister has Face 1 and he has looked quite different over the years due to different face painting and different wigs. When he was introduced he had short 'basin' cut hair which made him look very young and sweet. He was blushed all over his face so he looked like he'd been in the fresh air all day, in keeping really with his attire. In 2012-13 Alister had a slightly more modern cut to his wig making him look a bit more sophisticated- also the blushing to his face paint was reduced adding to the more groomed look- during this stage he seemed to wear his clothing fashionably. Here in 2014 he's more rough and tumble with is unkempt longer hair- it draws attention to his untucked shirt I think. His wig is longer, Sonja suggested new owners could cut it to how they liked it. 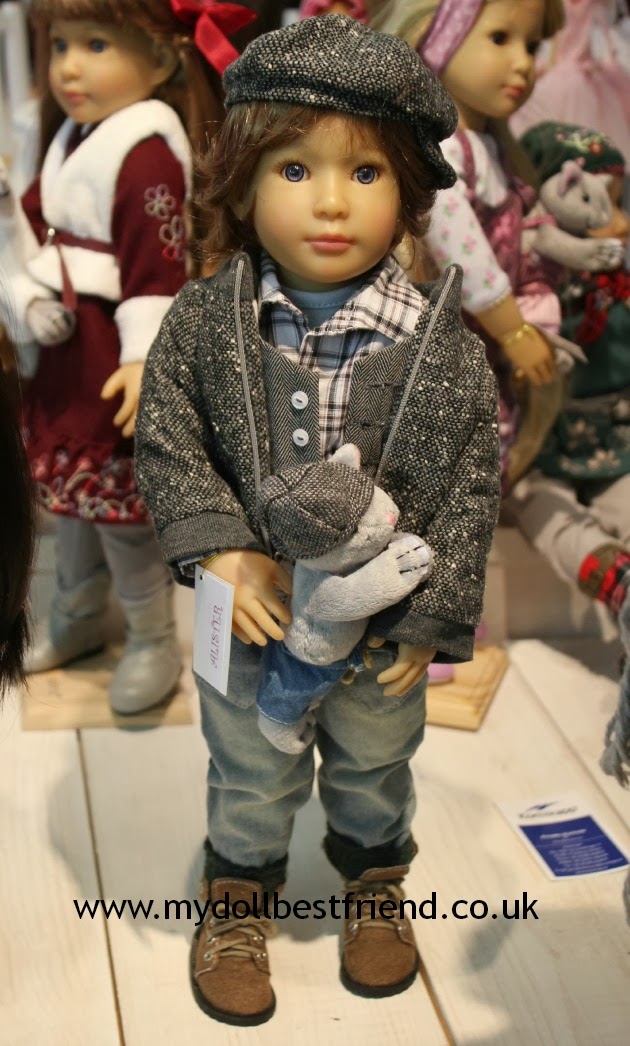 Grace (below, left) was first introduced in 2011 and since then she has had a few changes in wig and even in eye colour. At the beginning of 2014 she was made with blue eyes and Henriette's golden blonde wig, though in the 2014 collection she has a lighter blonde wig and brown eyes again. Her outfit used to include ribbon bows on the shoes which tied around the ankles and matched the outfit however in 2014 she doesn't have these- she has plain lilac ballet shoes. The ankle ties were created to hide the ankle joints in the 2011 promotional photos. This was one of Sonja's creative experiments when she was altering the lower arms to fit more neatly and have wrist joints she also tried out ankle joints. However Grace was unable to stand successfully so the ankle joint was removed and Grace was never sold with ankle joints. Grace's outfit kept the ribbon ties, until this year. This year the Grace outfit can be purchased separately and the shoes do not have ribbon ties. In 2012 Grace won a much coveted DOTY Award for "Collectible Vinyl/Plastic Doll, Less than $150".

Sophie, below right was introduced in 2012 and has been one of the most popular Kidz n Cats dolls, along with Grace and Alister. She has Face 1, like Grace and many other dolls.

Jodie has the same face sculpt as Paulette and Julia as well as Wish Doll Henriette. Her eyes are grey-green. It is the fifth and most recent of Sonja's Kidz n Cats faces. Jodie will not be available until later in 2014- expected to be August/September time. Jodie's outfit is original for 2014 but if it looks a bit familiar it might be because the skirt fabric has been seen before. It is the same fabric as Henriette wears as a neck tie or scarf. Jodie's shoes are like Grace's.


The Kidz n Cats dolls are growing in popularity all the time and this is because the dolls have exceptional posability, play-ability, are very beautiful and collectible at a price range that for an artist designed doll is reasonable. Sonja Hartmann manages to make her dolls look like little people, little friends that will be great company. The Kidz n Cats dolls touch children and collectors alike with their companionable realistic build and sweet faces. The Kidz n Cats clothing is fun, fresh, stylish and luxurious too because of the fabrics Sonja chooses.
Sonja brings fun and freshness to her designs, with plenty of dolls each year to choose from. The Wish Doll Aletta, a customisable doll due to be lauched on February 8th following in the success of Wish Doll Henriette is set to be very popular and expected to sell out quickly.
Certainly, looking at the already long list of email subscribers that we have for information about Aletta when she is launched on Saturday, it does seem that there is even bigger excitement around the brand Kidz n Cats brand than ever before.
Categories: Brands, Kidz 'n' Cats Dolls & #News & Latest Releases
Tags: sonja hartmann & kidz 'n' cats