Anna was out shopping on Saturday. Through the corner of her eye she noticed a sign in the window of the London Candy Co.  It read "Easter Fun Hat Parade 5pm!). Excited, she went inside to find out more about it. 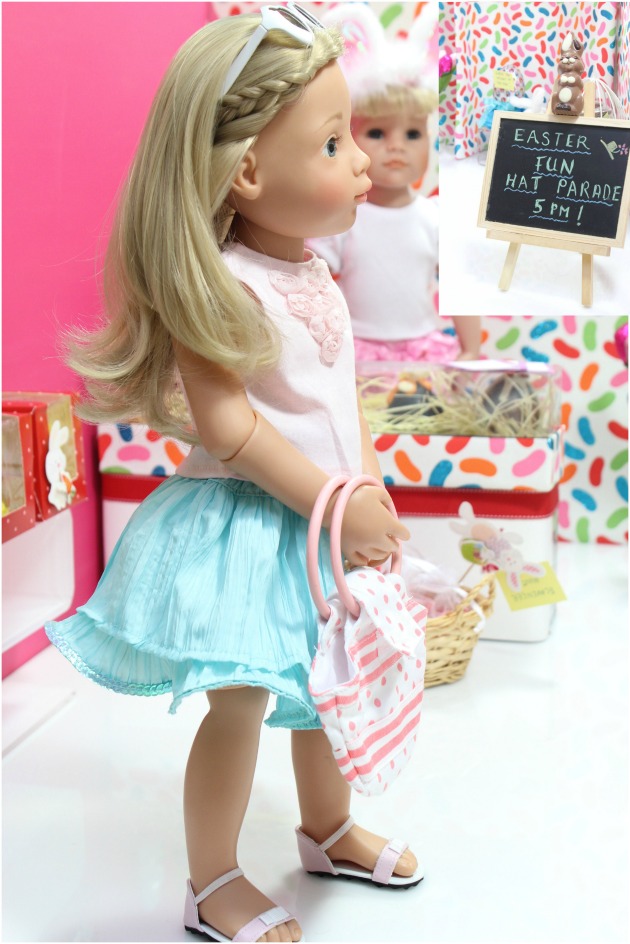 The shop assistant, dressed in fluffy white bunny ears, told her to come back just before 5pm if she'd like to enter the hat parade to win the large plush bunny on the display stand. 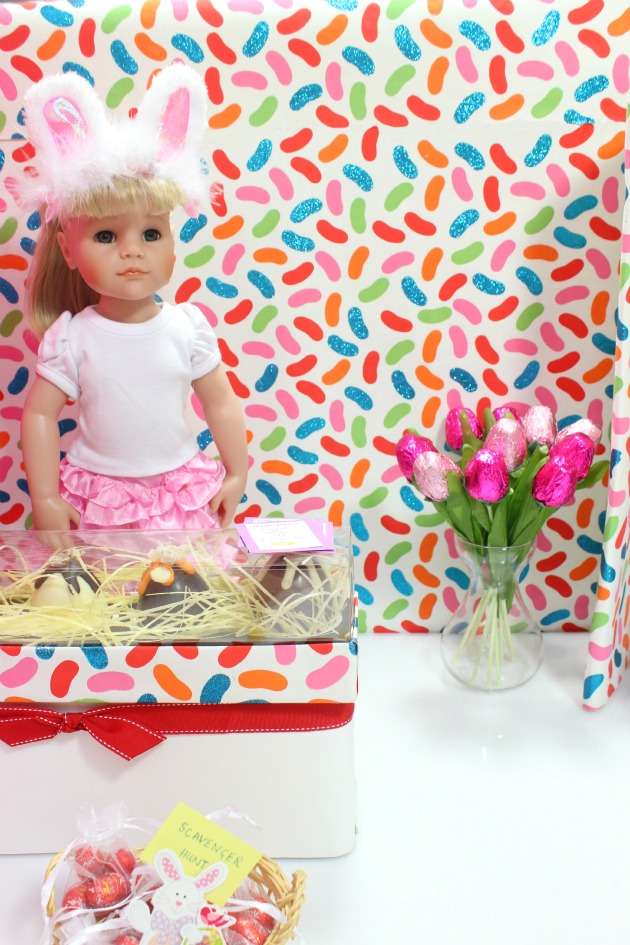 Anna picked up a flier, popped it in her shopping before having a little taste of a piece of dark chocolate she was offered! Yum!! 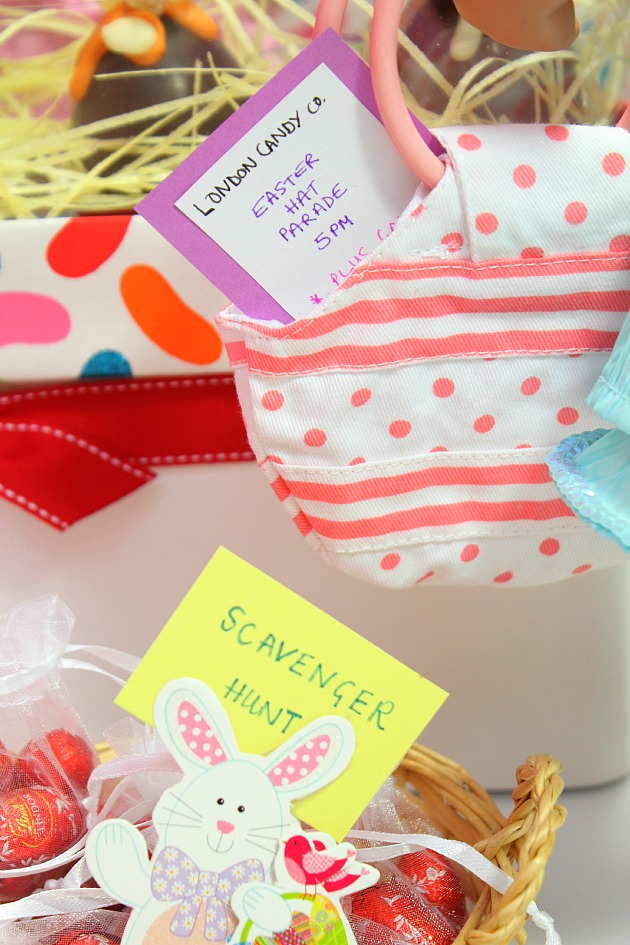 Anna came running back to the house, out of breath with excitement, 'there's an Easter
hat parade at The London Candy Co at 5pm, can I go?  Can I phone Clara, Sophie and Hannah, pleeeease?!'
Mum asked, 'Have you got a hat?'.  'No, but I can make one!'  Anna phoned Clara and Sophie then set to work on making her hat.  Half an hour later, 'Oops, I've forgotten to phone Hannah! I'll do that now.'

Anna finished her hat, with all the phonecall making it wasn't her best, but it was time to go and she was looking forward to the excitement of the hat parade and perhaps having another little bit of free chocolate!

The girls met at 4.55pm, just in time for a very quick look round at all the wonderful Easter goodies, before the hat parade started. 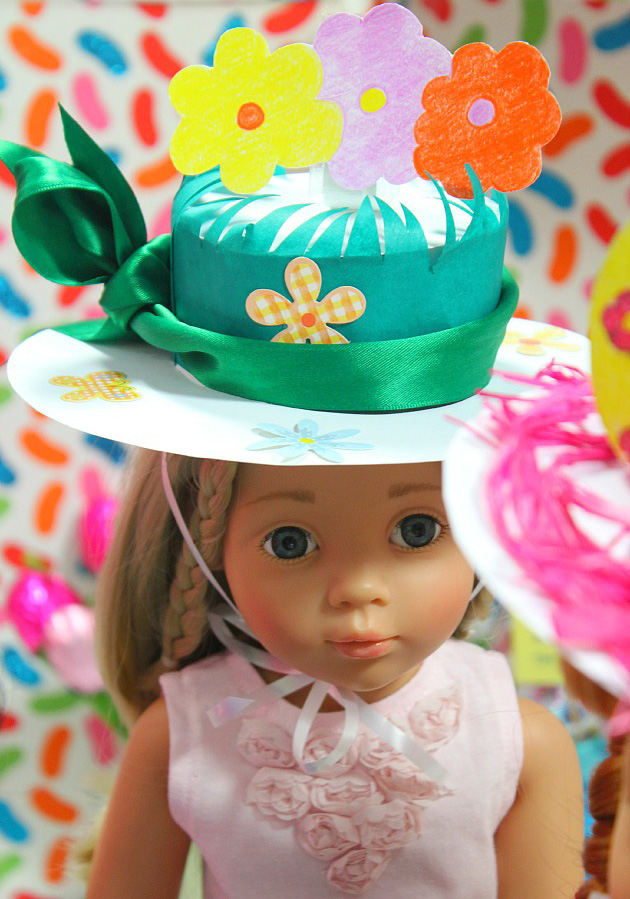 Sophie was wearing a proper Easter bonnet with Easter eggs on a bed of straw, all pink and lovely to co-ordinate with her new dress and shoes, bought specially for Easter. 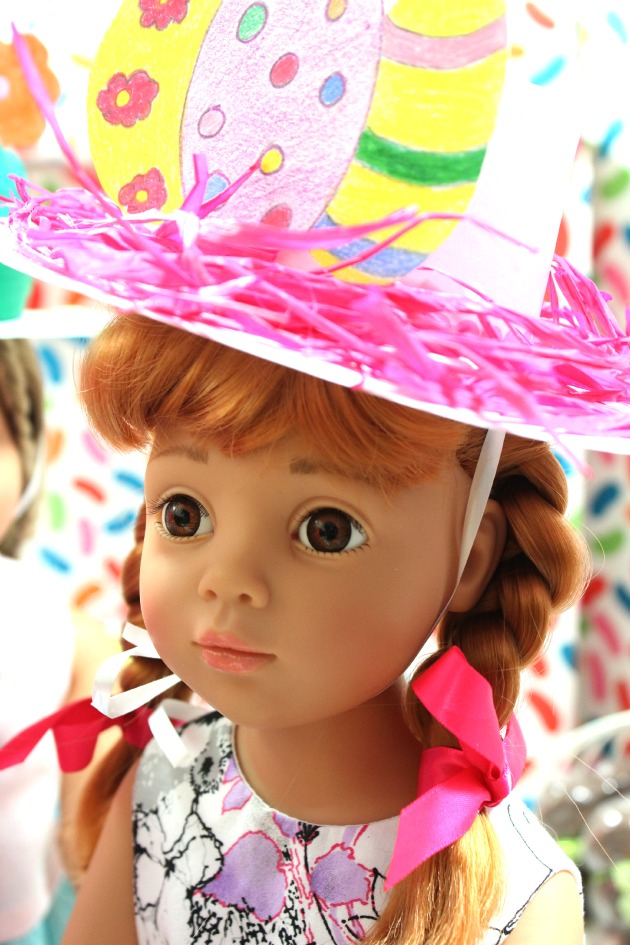 They looked at their friend Hannah who had just arrived, a bit late.  Oh dear, Hannah hadn't had time to finish hers because she'd only learned about the hat parade from Anna at the last minute.  Hannah had started to decorate her hat with spring lambs on a hilly mountain but she hadn't got very far as the lambs didn't have faces and the hill didn't have a valley (or the hat a brim for that matter!). The girls reassuringly told her to turn it round and tell everyone her Easter bonnet was supposed to be like that; it was of Spring Lambs' bottoms! Their justification was, babies bottoms are cute, and so are lambs' bottoms! 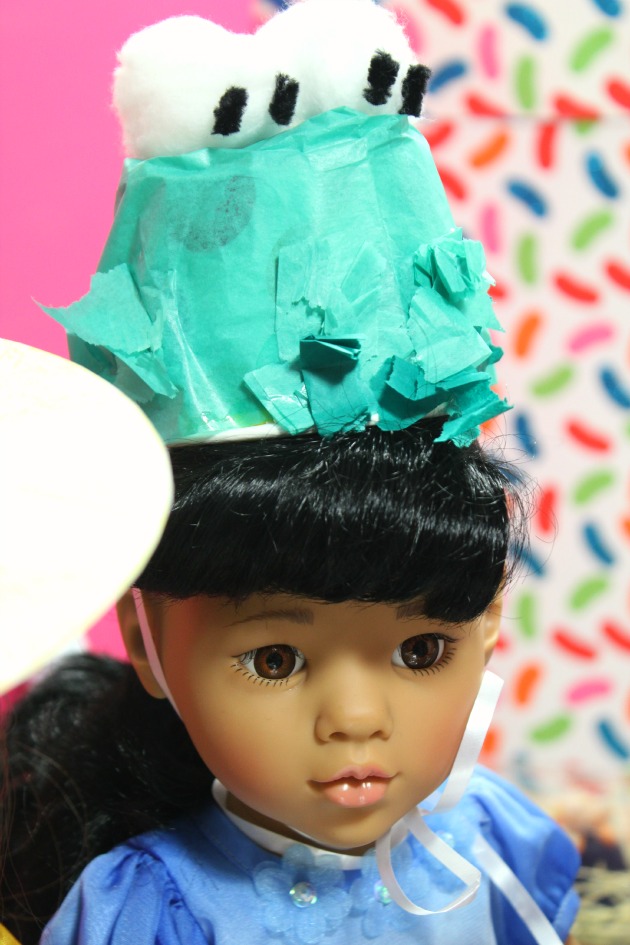 The girls took a look around this new London Candy Co. sweet shop that had just opened in their town. 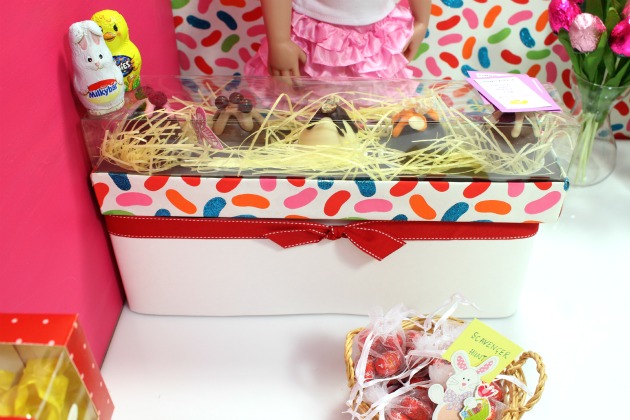 'Look, there's a guess the weight of the egg competition!' said Anna, 'I'd like to win that!'. 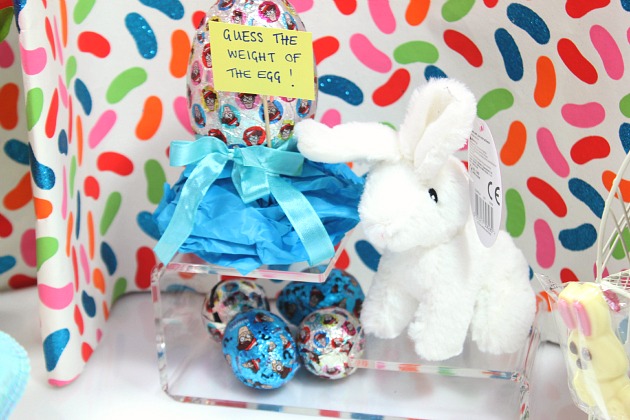 From behind the counter, dressed with white ears the shop assistant called over, 'yes, whoever's closest with their guess can take home that large egg just before Easter! Leave your guesses and your email addresses and we'll email you on Good Friday if you're the closest!'.

'Look at these bunnies, Hannah, they're so cute!'.  'I love the chicks' said Clara. 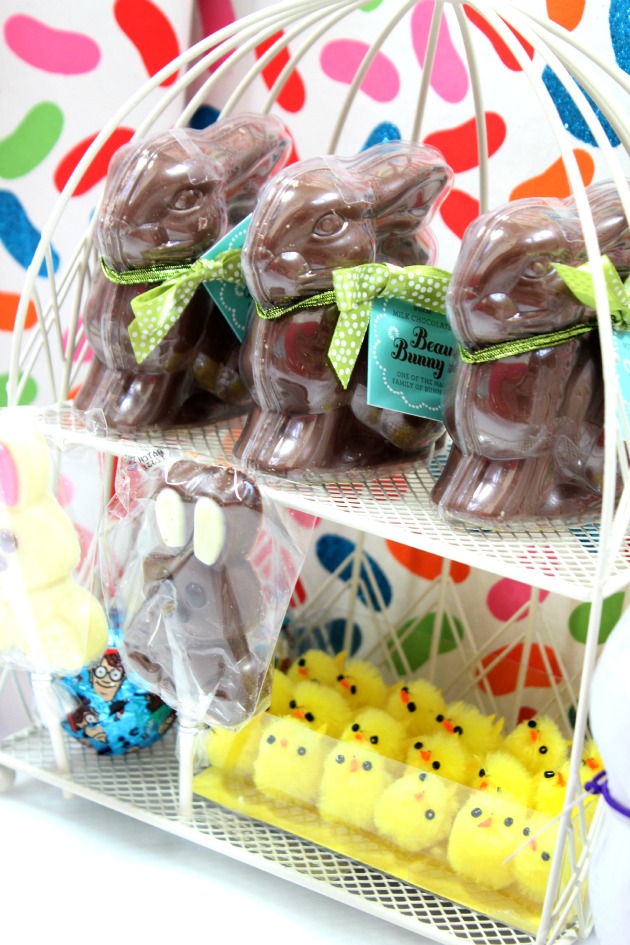 'Listen up!' said Anna.  'They're calling the hat parade now'.  The girl behind the counter anounced (pointing), 'Whoever wins, takes home that huge fluffy white bunny over there!'.

'I'd call her Flopsy if I won her' said Sophie.  'Original!!' chirped Anna. 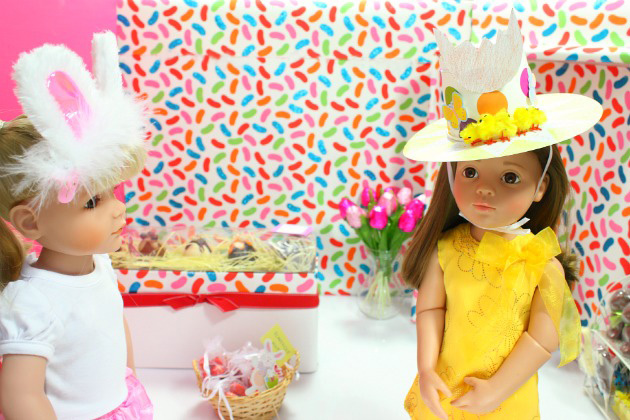 The girls got into a line and waited for their turn, there were quite a few who went before and their bonnets were really good.  Then it was their turn.  One by one they slowly so as not to topple their creations, walked past the judge who turned out to be the shop assistant owner.  Clara looked beautiful and she'd come dressed as a chick to match her hat.  Not surprising really as she'd had the longest time uninterrupted to make an Easter hat and get ready. After just 5 mins it was all over and the winner was announced. 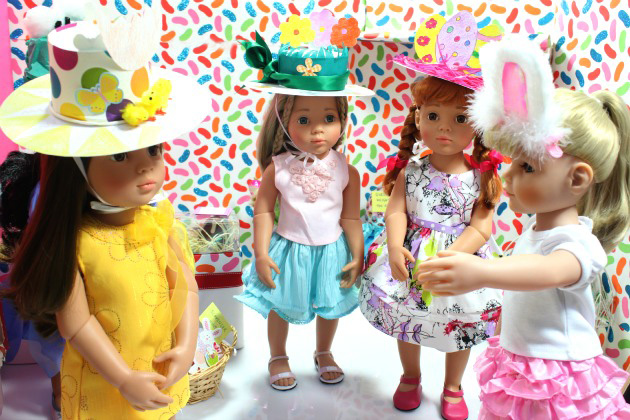 'The winner is the girl in yellow, wearing the little chicks hatching out of eggshells'

'Clara, that's you!' the girls said at the same time. 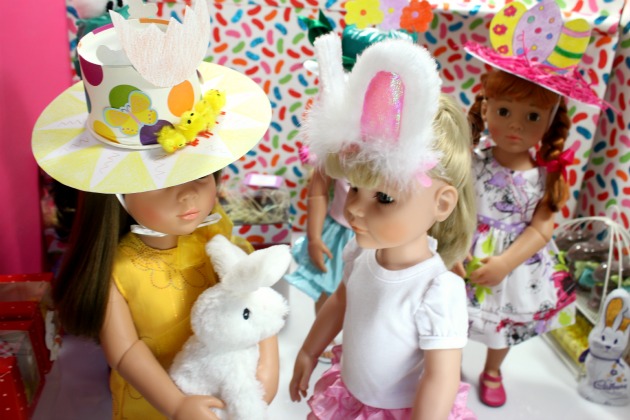 Clara stepped forward to collect her white rabbit and the girls congratulated her.

Just before they left the London Candy Co. they guessed the weight of the huge blue egg and left their email addresses. 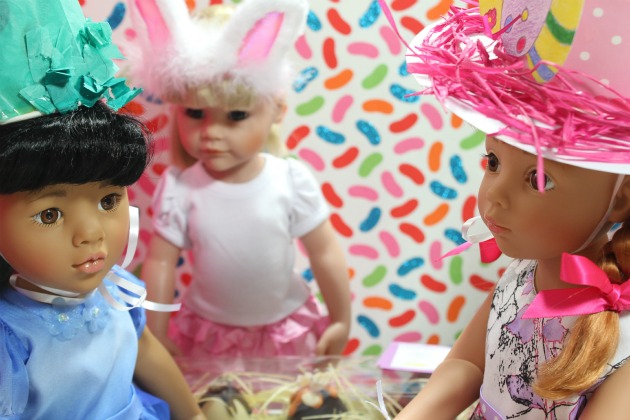 What a fun day! I hope the Easter bunny visits the London Candy Co on his way to my house thought Sophie.  Hannah had long forgotten about her disastrous Easter bonnet and was enjoying the chocolate tasting, she'd worked out the best place to stand was right by the counter where the plate of chocolate pieces was regularly being topped up. 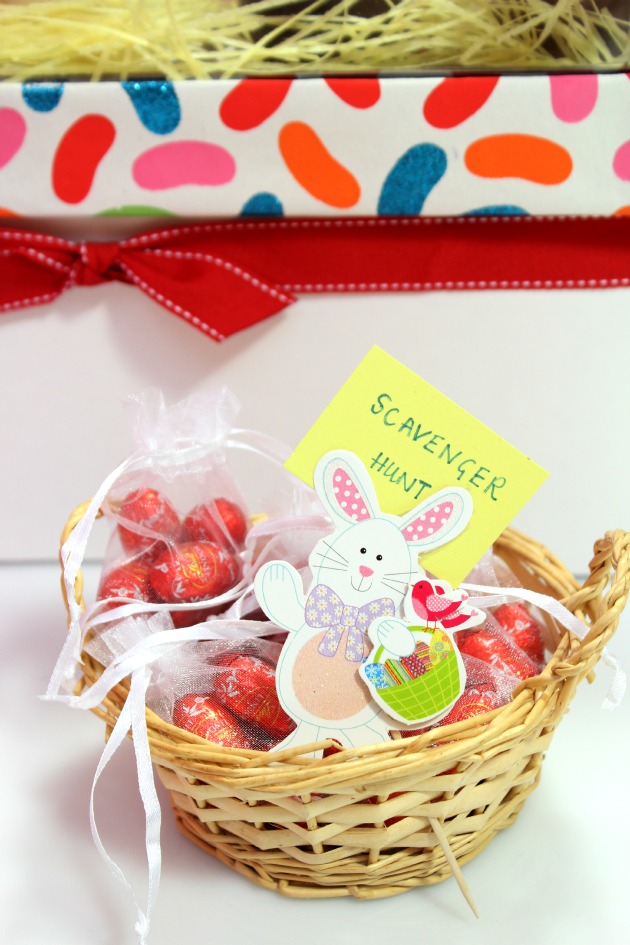 That's where she spotted the scavenger hunt bags, filled with chocolate eggs.  Sophie picked a bag up and paid for it. 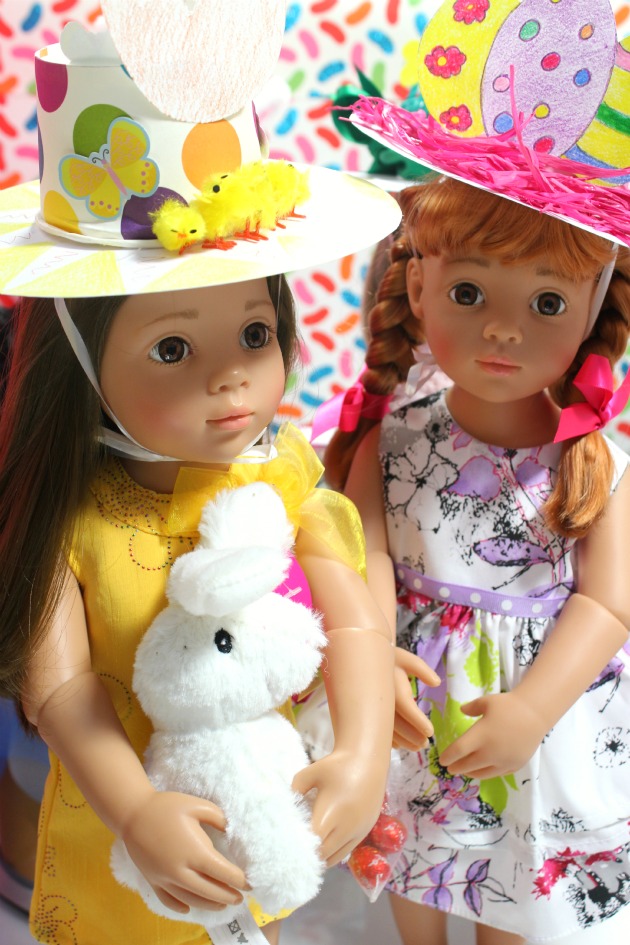 They made their way out of the shop. 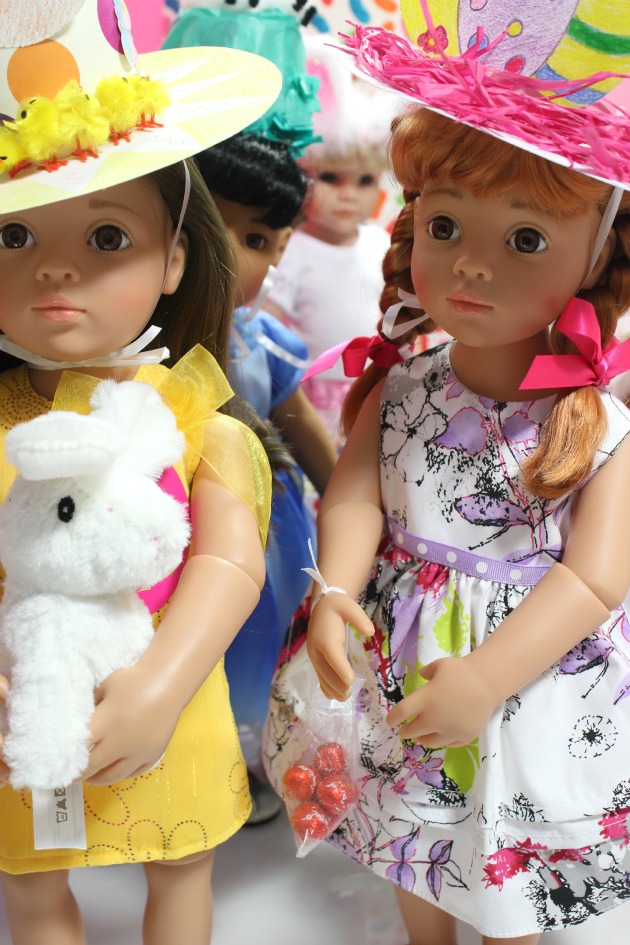 Not entirely though, as they were stopped by the new shop's publicist for a photo to go in the Westminster Daily. 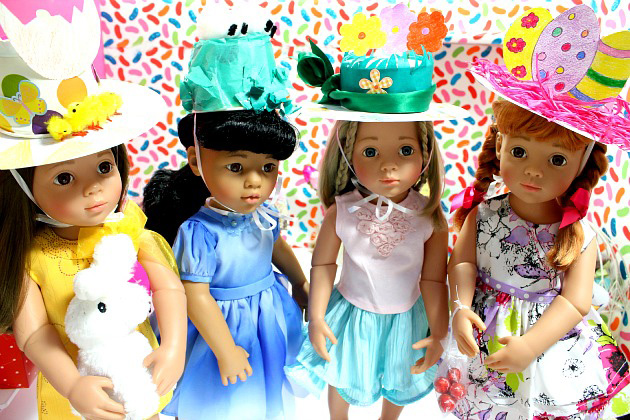 They posed obligingly and then were joined for the second quick snap by the shop owner. 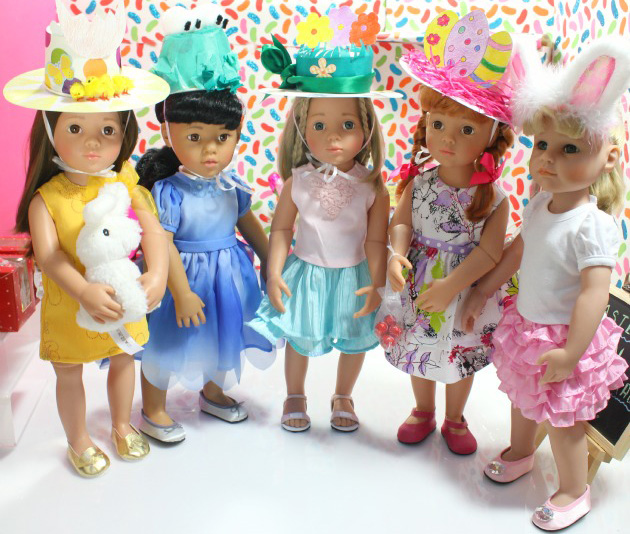 What a happy day and now they were going to be semi famous as well!