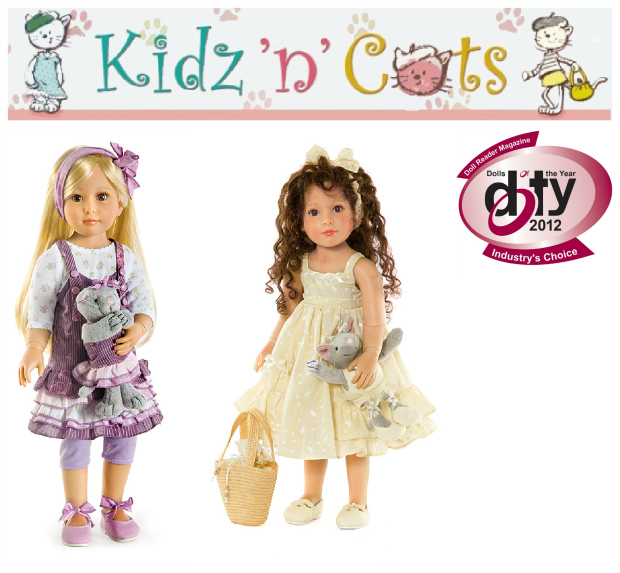 Usually each January in Orlando Florida doll manufacturers, artists, retailers, buyers and collectors from all over the world meet at what is considered the premiere trade show for the doll industry, the IDEX.

In the coming year it will be held in April. One of the highlights of the event is the Doll of the Year Awards or DOTY, for short where the awards for the winning dolls in each category is presented.
Another highlight is the first glimpse of the yearly doll releases by doll artists and companies from around the world.

This year Kidz 'n' Cats dolls Grace and Laura came away with DOTY 2012 awards.  Laura won in the category "Children's Play Doll" and Grace won in the category "Collectible Vinyl/Plastic Doll, Less Than $150".
This was an excellent result for With Heart & Soul the company responsible for Kidz 'n' Cats dolls, and particularly for their doll artist creator, Sonja Hartmann, as it was the first time she had entered the Kidz 'n' Cats.
It is great news for them, and also for collectors who have bought these dolls.

In 2013 all four awarded dolls are still in current production.  Last year there were no Dolls Awards of Excellence as the DOLLS magazine merged with Doll Reader, which had already announced its Industry Choice winners for its own DOTY Awards for 2012. Instead this year the publisher has combined the best of both magazines into a new monthly DOLLS and there is now a single combined awards programme for 2013 onwards, the Dolls Awards of Excellence.

The photos below were taken in February 2013 by My Doll Best Friend at the New York Toy Fair where Sonja was exhibiting her Kidz 'n' Cats dolls. The five new Kidz 'n' Cats dolls for 2013 were unveiled for the trade to see and it was clear already from that moment that she had every chance of winning awards in 2013 with her new dolls.  The five new dolls for 2013 are Kiki, Carlotta, Stine, Annika and Elise.

Kiki is the first Kidz 'n' Cats doll to be made with a 'warmer skin tone'. Sonja describes Kiki as her' Hispanic looking doll'.

Carlotta and Kiki are both made from the same face mould yet look really quite different, it's Sonja's huge skill to create so many characters from the same starting point.

This year's Industry's Choice winners, Kiki and Carlotta as well as all the other winning dolls in various categories, go on to become the nominees for the Public's Choice awards voted on by DOLLS readers.  Photos of all the nominees, ballot, and online voting instructions are in the July 2013 issue of DOLLS. Voting is open to anyone in any country so if you would like to cast a public vote visit dollsmagazine.com before 1st September 2013. The 2013 Public's Choice winners will be announced online and in the December 2013 issue of DOLLS magazine.  It's always good to have a winner in your collection!

My Doll Best Friend congratulate Sonja Hartmann and her small team on yet another year of huge achievement and wish them much continued future success in the Dolls Awards of Excellence with their Kidz 'n' Cats dolls in 2014.